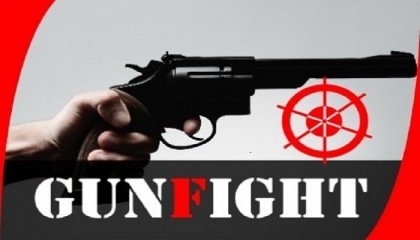 A policeman and a suspected robber sustained gunshot wounds in an alleged gunfight between two groups in Rajendrapur on Sunday night.
Police said the injured policeman is Sub-Inspector Jahirul Islam of Sadar Police Station while the other is a robber, Sharif.
Alamgir Hossain Bhuiyan, officer-in-charge of Sadar Police Station, said that on information that a gang of robbers gathered in front of gate no-4 in Rajendrapur Bhawal National Udyan, a team of police, led by the SI, conducted the drive.
The robbers opened fire  as soon as the police team reached the spot, triggering a skirmish, police said.
SI Islam and the robber werw injured in the gunfight, said the OC adding that the injured were admitted to Shaheed Tajuddin Ahmad Medical College Hospital.