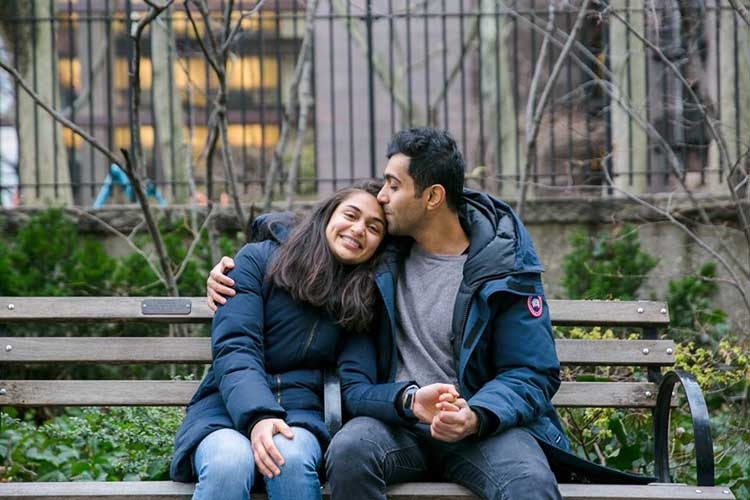 "4 years ago, I was just starting out in New York. It was overwhelming-the shift from a flexible university life to a 9-5 corporate routine. I'd drag myself to work, but then, you know how in school, having one thing to look forward to makes even 9 am classes worth it? Rohit was that for me at work. His cubicle was in front of mine, and meeting him made mornings less dull.
Over time, we started going for lunch during work to this park we both loved. Once, I was in office late and hoped he'd be there too. 2 hours in, I gave up. But then suddenly he came strolling in-my stomach dropped! We sat on the floor talking endlessly and showing each other photos from our past.
Then one night, we went out for dinner. At the end of the night, he leaned in for a kiss. I turned at the last second- I was so shy! Then when he leaned again, I gathered some courage and we kissed.
There was no asking out, the first kiss spoke volumes! We've been together for 2.5 years now. He's still my best friend, my solace at work, my calm amidst the city bustle-but most importantly, he's the first person who's made me believe in the saying, 'when you know, you know'.
A month ago, we were on one of our park strolls. And then the most unusual series of events followed. A woman, out of nowhere, handed us my favorite pizza, musicians started playing my favorite Ed Sheeran songs, and a magician started performing tricks! I had no idea what was going on and felt like I was in an alternate reality.
Amidst our relatives going bollocks over all the wedding planning, I can't wait to start my life with him. To someday move to a new country together. To learn the local language there; to maybe open a small restaurant together some day. To grow old together, with our silly little shenanigans. Like me turning loudly to get his attention after a fight, and him taking the hint and hugging me from behind!"
Humans of Bombay, Fb