Modi tells Indians to save themselves from coronavirus 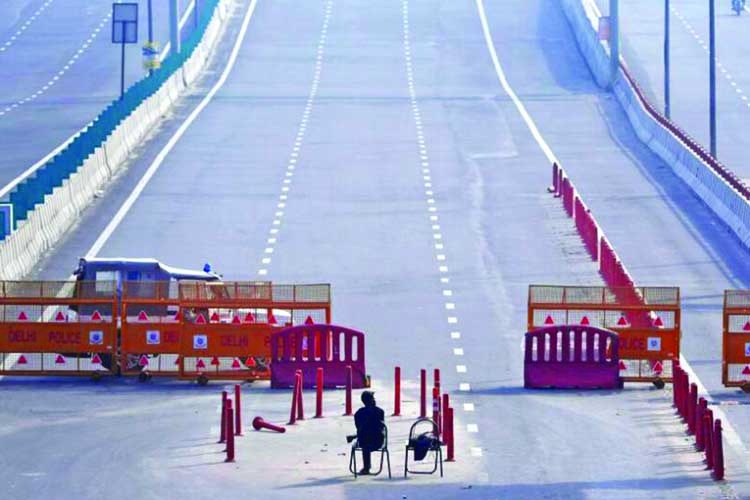 A man sits at barricade during a lockdown by the authorities to limit the spreading of Covid-19, in New Delhi on Monday. -Reuters
Streets were deserted in the Indian capital on Monday and office buildings shuttered as a lockdown to halt the spread of the coronavirus began and Prime Minister Narendra Modi urged people to stay at home and save themselves.
India has reported 415 cases of the coronavirus and seven deaths but health experts have warned that a big jump could be imminent, which would overwhelm the underfunded and crumbling public health infrastructure. Modi said many Indians were not taking the lockdown seriously.
"Please save yourself, save your family, follow the instructions seriously," he said on Twitter.The lockdown in the capital of more than 18 million people will last for the rest of the month.The authorities banned gatherings of more than five people in several of India's states including Maharashtra in the west, which has had the highest number of cases.
They warned of legal action against people violating the ban. In the financial hub of Mumbai, the state capital, suburban trains, which usually carry eight million people a day, were suspended until the end of the month. Bus services were limited to people in essential services such as healthcare.
Newspapers cancelled print runs in Mumbai after vendors refused to distribute them due to worry about the coronavirus, which emerged in China late last year and has spread around the world.
Globally, cases exceed 325,000 with deaths topping 14,000. Muhammed Nizam, who runs a small meat shop in an alley in Delhi's Nizamuddin neighbourhood, said supplies were falling and he had had to raise prices."The price of chicken had fallen earlier because people stopped buying it fearing the virus was being spread through it. But now I don't have any chicken left, everything's been sold," he said.
Neighboring Nepal ordered all land border crossings with India and China shut until March 29, saying thousands of people, most of them Nepali migrant workers, had crossed into Nepal in recent days from India, believing their homeland to be safer. Nepal has reported only one case of the coronavirus.
"The closing of the border crossings is meant to ensure that no one infected with the virus crosses over to Nepal from India and China," said Surya Thapa, an aide to Prime Minister K. P. Sharma Oli. In Pakistan, the opposition-ruled southern province of Sindh began a lockdown including in the biggest city of Karachi, even though Prime Minister Imran Khan said he opposed such a sweeping measure because of the economic consequences for the poor.
---Reuters, Mumbai