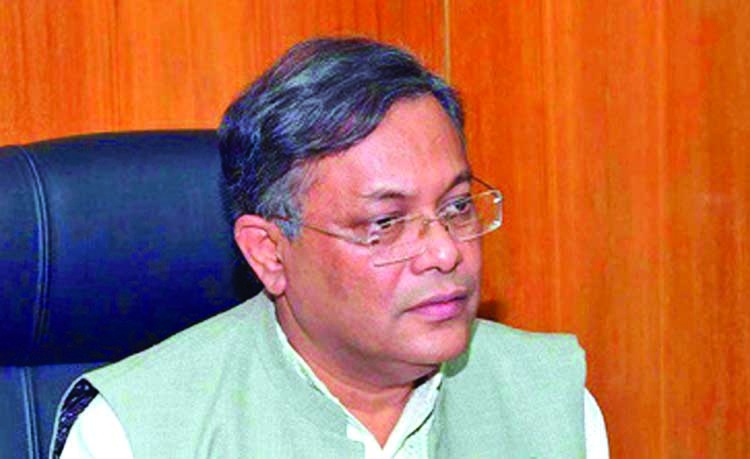 Information Minister Dr Hasan Mahmud on Monday called upon the journalists to work in unison with the government to raise awareness among the people to fight the COVID-19.
He came up with call at a view-exchange with leaders of Dhaka Union of Journalists (DUJ) at the ministry conference room at the secretariat, reports BSS. Managing Director and Chief Editor of Bangladesh Sangbad Sangstha (BSS) Abul Kalam Azad, DUJ President Quddus Afrad and General Secretary Sajjad Alam Khan Topu attended the meeting, among others.

On the occasion, DUJ leaders placed some demands and protested against the firing of 27 journalists from SA TV and seven from Agami News.In response, Hasan said firing of newsmen is very unexpected and regretful during this crisis period.He urged the media owners not to fire journalists in this period.
Turning to making people aware about the global pandemic, the minister said the people have already become conscious in cities but there is lack of awareness among rural people.Media can play a big role to make the people remain alert to fight the novel coronavirus, he said.Hasan, also Awami League joint general secretary, underscored the need for making united efforts to tackle the pandemic shunning all differences and altercations.
It is not a time to do politics rather it is time to get rid of the politics of blame game, he said.The minister said there are some developments in the USA and China to devise some remedies to the deadly virus. If it is possible to invent the remedial medicine to cure the infection of the virus, it will be a great global achievement to save the mankind, he pointed out.Hasan said he earlier discussed with BFUJ and DUJ leaders about making group health insurance for journalists for the betterment of media houses.
About the gratuity and income tax issues in the 9th wage board award for journalists, the minister said the wage board award has been formulated through a process and now it will not possible to him to do anything solely in this regard.He said a monitoring committee comprising representatives of journalists has been formed to implement the wage-board award. He hoped that all newspapers would implement the wage-board award.
The minister also expressed his optimism to place 'Media Workers Bill' in Parliament in the next session.He said the enactment of media workers and national broadcast laws will ensure legal safety of journalists.The minister said the law ministry has already started working on the national broadcast law.He said in the wake of coronavirus, press conferences and briefings will have to be held in a curtailed way or through videoconferencing.