'Saudi to continue support to BD on Rohingya issue' 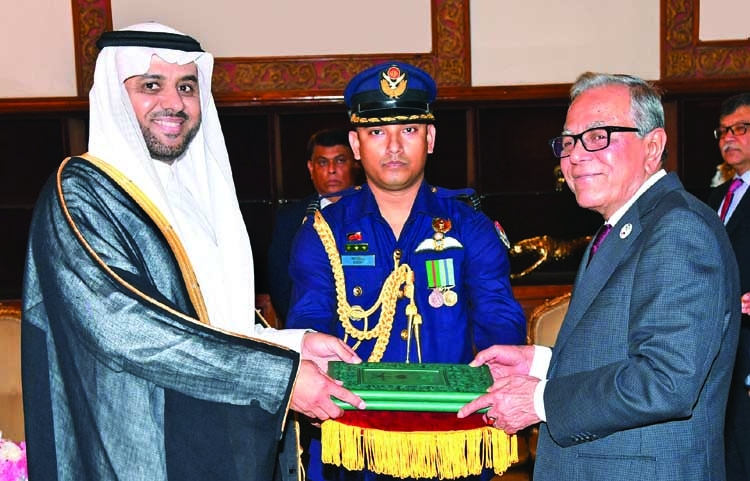 Newly appointed Saudi Ambassador to Bangladesh Essa Yousef Essa Al Duhailan handing over his credential to Bangladesh President Md Abdul Hamid at Bangabhaban in the capital on Monday. -AA
The Saudi Arabian government will continue to provide its supports to accelerate the socio-economic development of Bangladesh and also to end the Rohingya problem.
Newly appointed Saudi Ambassador to Bangladesh Essa Yousef Essa Al duhailan stated this as he presented his credential to President M Abdul Hamid at Bangabhaban in the capital on Monday.
"The Saudi government's assistances for socioeconomic development of Bangladesh will continue . . . Besides, all-out support for the forcibly displaced Rohingyas, who took shelter into Bangladesh, will be continued in days to come," the envoy told during the meeting with the President.
Welcoming the envoy, the President hoped that the existing bilateral ties between Bangladesh and Saudi Arabia will further be expanded during his stay, said President's Press Secretary Joynal Abedin, reports BSS.
Expressing his satisfaction over the existing commerce and investment relations between the two brotherly Muslim countries, President Hamid urged the ambassador to take more effective measures to further expand the ties.
The head of the state said a good number of Bangladeshi manpower, including skilled, semi-skilled and unskilled workers, are working in Saudi Arabia with contributing to the overall development of two countries.
The envoy sought cooperation from the President during his assignment in Bangladesh and the President assured him of providing all sorts of cooperation. Secretaries concerned to the President and high officials of the Foreign Ministry were present.

Earlier, on his arrival at the presidential palace, a smartly turned-out contingent of the horse-mounted President Guard Regiment (PGR) gave the envoy a guard of honor as part of the ceremony.