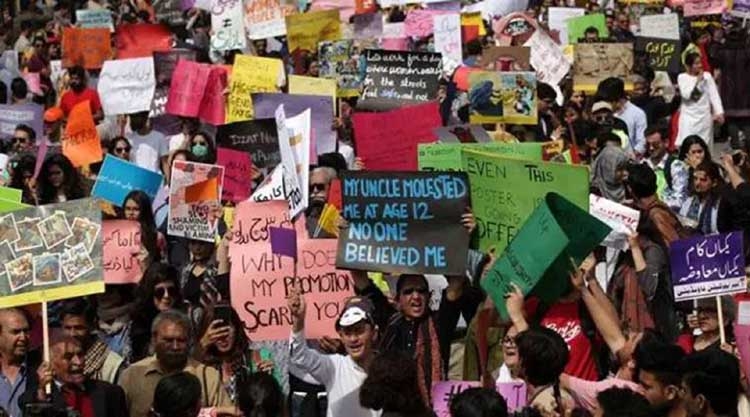 Women and men carry signs as they take part in an Aurat March, or Women's March in Lahore, Pakistan March 8, 2020.
Khaled Ahmed
On March 8, women took out a procession in Islamabad on International Women's Day under a banner saying, "My Body My Choice" (MeraJism Meri Marzi).
The march, called Aurat March, was attacked by a crowd of men aligned with the religious parties and the infamous Red Mosque of Islamabad. Some protesting women were injured but the event created the sort of repercussions they wanted. They wanted their right to come out from the tyranny of men, especially regarding their bodies.
The government of Prime Minister Imran Khan got scared and stayed away, saying the reference to "body" in the slogan offended Islamic edicts. Among most Muslims, reference to the female "body" (jism) only means fornication. Misogyny is rampant in Pakistan and the Islamic world. In the World Economic Forum (WEF) Global Gender Gap Index Report 2020, Pakistan is ranked 151 out of 153 countries, indicating a dismal record on human rights for women. It is placed at the very bottom of the seven South Asian countries included in the Index.
Women are called "aurat", which means "something shameful" in Arabic, which is perhaps why the Arabs don't use the word any more. In Iran, where the clergy rules, their status is pathetic.
Lawyer NasrinSotoudeh, who had dedicated her life to defending Iranian women punished for removing their hijabs in public, and was in the crosshairs of Iran's theocratic government for years, has been sentenced to a total of 38 years in prison and 148 lashes by a court presided over by a bearded cleric in 2019. (It was a "secret trial".)
In Pakistan, most women living away from big cities have to survive in a hostile environment. Almost half of Pakistan's 225 million population comprises women, which means half of Pakistan is getting a raw deal in the 21st century. The story of Qandeel Baloch from South Punjab, who was murdered by her brother in 2016, is soul-searing.
She was a model and TV actor from a region infested with madrasas and nonstate actors fighting Pakistan's illegal wars. She was not actually Qandeel Baloch. She changed her name from FauziaAzeem to Qandeel. She leaned on sexual provocation to become popular. She appeared in seductive videos that became viral on the internet till she got included in Google's list of the "top ten Pakistanis most searched for online" in 2015.
Qandeel was born in 1990 in the family of a peasant in village Shah Sadar Din in Dera Ghazi Khan district of Multan division. She had many brothers and sisters growing up in an environment described by the Asian Development Bank as "the least developed division of Pakistan, with more than 50 per cent of the population below the poverty line".
She had hardly started going to school when she was married off at the age of 12 to an oaf who beat her to validate his manhood until she was forced to leave him and her born-between-beatings son. In time, she ran away from Shah Sadar Din, deciding to survive the challenge of her foredoomed life. She became rebellious, refusing to accept passively the values she was expected to uphold as a receptacle of honour in a dehumanised culture.
A brother rang from the Gulf telling her other brother Waseem to get rid of her because she had dishonoured the family. Yet, her humanity made her send her mother Rs 10,000 every month, in contrast to her brothers who let the old couple starve. She helped her sisters and bought them expensive gifts with the money she earned from showbiz. When Waseem strangled her to death in July 2016, her parents didn't stand with him. Both spoke to the police in her favour, praising her humanity and caring nature and were not convinced that she had violated their honour.
That year, the Human Rights Commission of Pakistan announced that there were 326 honour killings in Pakistan, of which 312 victims were women: The most common motive appeared to be retribution or punishment for illicit relations and ignoble marriage choice. It declared: "Of the 326 murders, 67 were committed by a husband or ex-partner; 64 by siblings; 41 by parents; 30 by other relatives; 15 by in-laws; and 10 by the deceased's son or daughter."
In 1947, a Muslim girl had half a right in the witness-stand and inherited half of what her brother inherited. She was better off than the Hindu girl who inherited nothing. Then Prime Minister Jawaharlal Nehru changed the law: The Hindu girl inherited equally with her brother, but the Muslims stuck to their sharia and refused the reform. Today, a Hindu girl in India is legally a full citizen; a Muslim girl remains a second-class citizen.

Khaled Ahmed, consulting editor at Newsweek Pakistan and author of the book, Sectarian War: Sunni-Shia Conflict in Pakistan at the Woodrow Wilson Centre in Washington DC