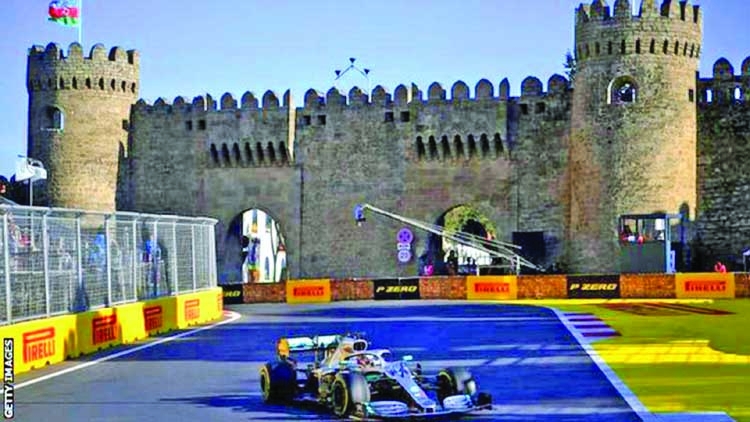 The Azerbaijan Grand Prix is run on the streets of Baku. -BBC
The Azerbaijan Grand Prix, due to take place on 7 June, has been postponed as a result of the coronavirus crisis.The street race in Baku is the eighth race to be called off at the start of the 2020 World Championship season. Race organisers said they would work closely with F1 "with a view to announcing a new race date later in 2020". The Canadian Grand Prix, on 14 June, is the first race on the schedule that has not been postponed.
However, the Montreal event must be considered in doubt after Canada became the first country to pull out of this summer's Olympic Games in Tokyo. Seven Grands Prix - Australia, Bahrain, Vietnam, China, the Netherlands, Spain and Azerbaijan - have been postponed, while Monaco has been cancelled altogether.
F1 has accepted all existing dates may have to change as they seek to re-establish a schedule later in the year.Senior figures say when the season restarts, it will almost certainly not be a case of looking at the calendar and thinking about how to fit the postponed races in around the events that remain. Instead, existing races may have to move to make way for other races and then be added in at later dates.
That is because factors surrounding some races make them easier to reschedule than others, once it is considered safe for international travel to restart when the coronavirus epidemic is brought under control.
Races in northern latitudes, such as the Canadian, Dutch, Belgian and British Grands Prix, are restricted by the weather and would have to be held in the summer or early autumn. By contrast, races in hotter climates, such as Abu Dhabi, Bahrain or Singapore, or in the southern hemisphere, such as Brazil and Australia, could be deep into the European winter time.
And F1 will be flexible with its dates, too - the 2020 season could be extended into the early part of next year, and the start of the 2021 championship pushed back from its usual mid-March date.However, some races are more likely to appear on a revamped schedule than others, and the events in Spain, Australia and Brazil are among those most likely to be missed off any new calendar.