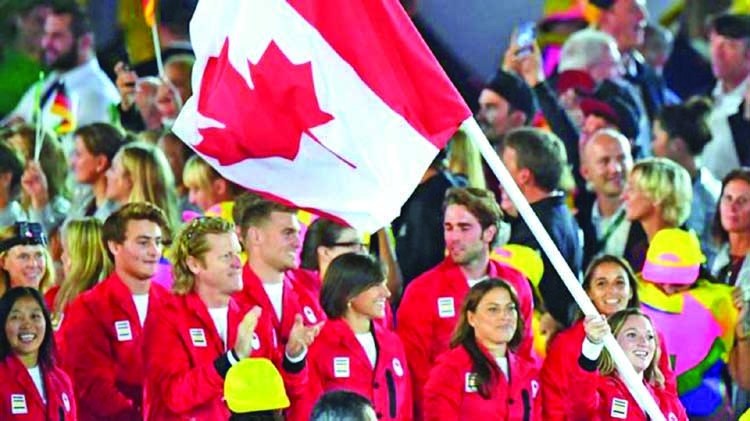 Canadian flag bearer Rosannagh Maclennan during the opening ceremony of the Rio 2016 Olympic Games. -BBC
The 2020 Olympic and Paralympic Games in Tokyo have been thrown into further doubt after Canada became the first major country to withdraw.
Japan's Prime Minister, Shinzo Abe, has admitted for the first time that the games could be postponed. Australia's team has said it is "clear" the games cannot go ahead, and told its athletes to prepare for a 2021 games.
The International Olympic Committee (IOC) is expected to decide the fate of the games in four weeks' time. The games are currently due to begin on 24 July. The country's Olympic and Paralympic committee said it had taken "the difficult decision" to withdraw after consulting athletes, sports groups, and the Canadian government. It then "urgently called" on the IOC, International Paralympic Committee and World Health Organization, to postpone the games for a year.
"While we recognise the inherent complexities around a postponement, nothing is more important than the health and safety of our athletes and the world community," their statement said. The Canadians later posted a message on Twitter saying: "Postpone today. Conquer tomorrow." For weeks, Japanese officials have said the games will go ahead as planned. But, speaking in parliament on Monday, Mr Abe admitted for the first time that Tokyo 2020 might have to be delayed.
"If it is difficult to hold [the games] in a complete way, a decision of postponement would be unavoidable as we think the athletes' safety is paramount," he said. But he insisted the games would not be cancelled altogether. The Olympics have never been postponed or cancelled in peacetime. The 1940 Olympics - which were called off because of World War Two - were due to be held in Tokyo.
The IOC has said postponement is one "scenario" but insists that cancellation "would not solve any of the problems or help anybody". In a letter to athletes, IOC president Thomas Bach said: "Human lives take precedence over everything, including the staging of the games... "At the end of this dark tunnel we are all going through together, not knowing how long it is, the Olympic flame will be a light at the end of this tunnel."