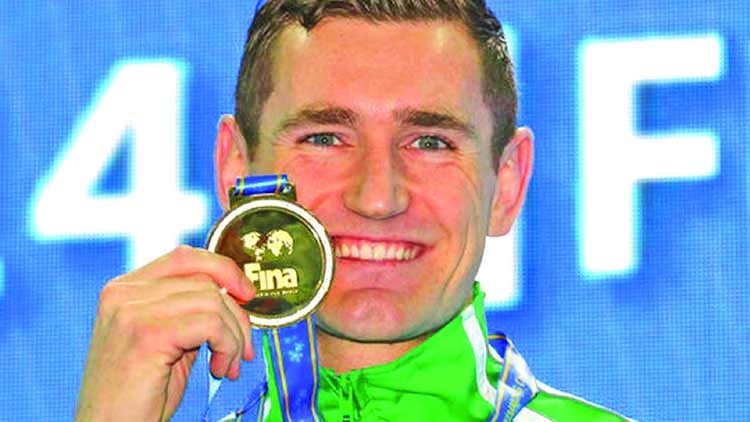 Gold medalist South Africa's Cameron Van Der Burgh pose during the ceremonies for the men's 50m breaststroke at the 14th FINA World Swimming Championships in Hangzhou in eastern China's Zhejiang Province. -Collected
Former Olympic swimming champion Cameron van der Burgh said he has contracted the coronavirus and added his voice to concerns for athletes' well-being if the Tokyo Games go ahead as scheduled.
Van der Burgh, who retired from competitive swimming in 2018, posted a series of messages on social media on Sunday describing how he had been ill with the virus for two weeks.
"Although the most severe symptoms (extreme fever) have eased, I am still struggling with serious fatigue and a residual cough that I can't shake," van der Burgh wrote on his official Twitter account. "Any physical activity like walking leaves me exhausted for hours."
Van der Burgh wrote that athletes are "exposing themselves to unnecessary risk" by continuing to train in preparation for the Olympics because there is "no clarification" on whether the games will go ahead as planned.
"And those (athletes) that do contract (the virus) will try rush back to training most likely enhancing/extending the damage/recovery time," he wrote.
He ended his thread with: "COVID-19 is no joke!" There are now signs that the Olympics, which are due to start on July 24, will be postponed. The International Olympic Committee announced Sunday it was considering a postponement amid growing pressure from athletes and some countries who want the world's biggest sporting event delayed or they won't send teams. The Japanese government has also accepted the possibility of a postponement.
But the IOC will only make a final decision within four weeks, it said, and that means athletes may still feel forced to train for the next month as they are not yet certain the Olympics will be pushed back.
The 31-year-old van der Burgh won gold at the 2012 London Olympics and silver at the 2016 Rio de Janeiro Games in the 100-meter breaststroke. He also won six world championship golds, both long and short course. He holds the short course world records in the 50-meter and 100-meter breaststroke.
Van der Burgh is from South Africa but moved to London to work in the finance industry after retiring from swimming. Most people only experience mild symptoms from the COVID-19 disease caused by the virus and recover within weeks.
But it is highly contagious and causes severe illness in some patients, particularly the elderly and those with weakened immune systems. People can carry and spread the virus without showing any symptoms.
More than 331,000 people have been infected worldwide, and more than 14,400 have died. Nearly 100,000 people have recovered.