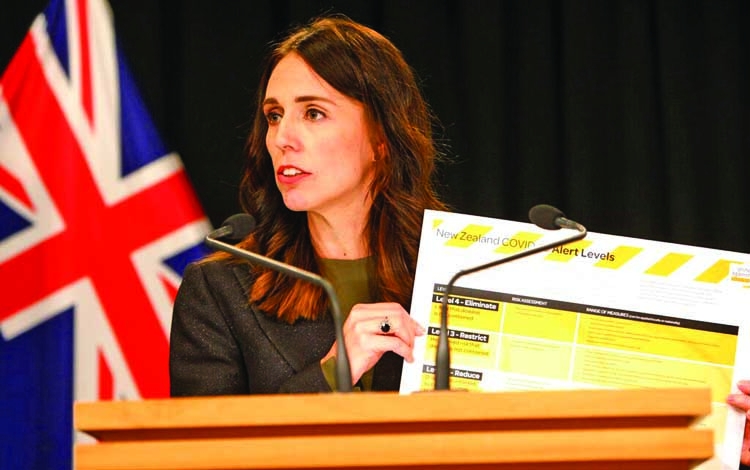 New Zealand will impose a four-week lockdown in a bid to smother coronavirus infection rates and avoid the mass fatalities seen elsewhere in the world, Prime Minister Jacinda Ardern said Monday. Ardern said the South Pacific nation was fortunate its infection numbers remained relatively low, with 102 cases and no fatalities in the population of about five million.
But she said the latest data showed COVID-19 was now being transmitted between New Zealanders, rather than just being brought in by overseas arrivals, meaning radical action was needed. Otherwise, she warned the number of cases would double every five days.
"If that happens unchecked, our health system will be inundated and tens of thousands of New Zealanders will die," Ardern told reporters."The worst-case scenario is simply intolerable," she said. "It would represent the greatest loss of New Zealand lives in our history and I will not take that chance."
She said a nationwide lockdown was "a simple but highly effective way to constrain the virus that gives it no place to go and will give our healthcare system a fighting chance".Ardern said that New Zealand over the next 48 hours would move into COVID-19 alert level four, the top rung of the government's emergency response plan unveiled Saturday. It means schools
and non-essential businesses will shut down and New Zealanders will be ordered to stay at home for the next four weeks.The declaration also gives the government sweeping powers to impose rationing and requisition facilities, as well as mobilizing the military to help enforce the lockdown.
Ardern acknowledged the move would create massive economic and social disruption but responded "this will save lives".She urged New Zealanders to follow self-isolation rules and support each other."Please, be strong and be kind," she said.
--AFP