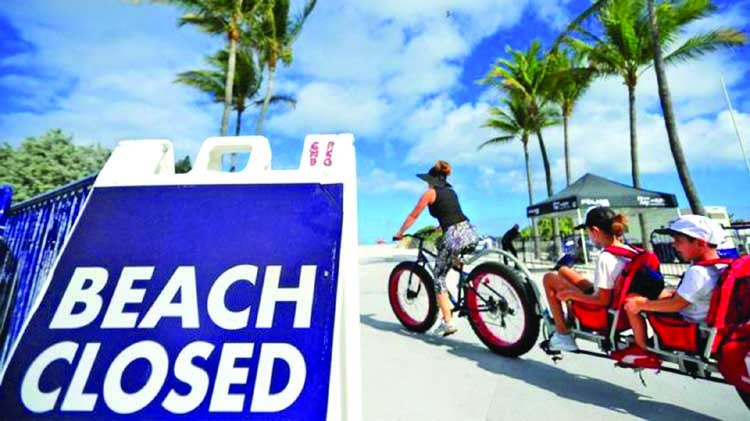 A sign closing a beach in Miami, Florida. -Getty
US President Donald Trump has ordered the deployment of National Guard troops in the three states hardest hit by the coronavirus outbreak.
Troops will be used in New York, California and Washington to deliver medical aid and set up medical stations after the number of deaths nationwide rose to 471 and infections to 35,244.There are fears of a shortage of key medical supplies in New York City.A bill to fund national relief efforts has been blocked in the Senate.
Opposition Democrats want the emergency stimulus bill, which is worth almost $1.4 trillion (£1.2 trillion), to include more money for state and local governments and hospitals, while Trump's Republicans are pushing for quick action to reassure financial markets.President Trump described the crisis facing the US as a "war", saying: "I want to assure the American people that we're doing everything we can each day to confront and ultimately defeat this horrible invisible enemy."
The medical stations the National Guard will set up have a capacity of 4,000 beds, 2,000 of which will go to California, 1,000 to New York and 1,000 to Washington state. In addition, Trump said he had approved requests to issue a major disaster declaration for the states of New York and Washington, and would do the same for California "very shortly". Such declarations make federal funds available for relief work.
Earlier, several state governors and local authorities pleaded with the federal government to make more medical supplies available.New York Mayor Bill de Blasio said on Sunday: "We're about 10 days away from seeing widespread shortages. If we don't get more ventilators people will die."
New York state accounts for almost half of the country's cases.In California, officials have instructed hospitals to restrict coronavirus testing because of a shortage of medical supplies.
Meanwhile, a hospital in Washington state - once the centre of the US outbreak - said it could run out of ventilators by April.It failed to pass the Senate on Sunday, getting 47 votes and thus falling short of the 60 needed in the 100-member chamber.
Democrats raised objections to the bill with Senate minority leader Chuck Schumer saying it had "many, many problems". Democrats accused Republicans of wanting to bail out big businesses.Talks between Democrats and the White House are continuing.
---BBC