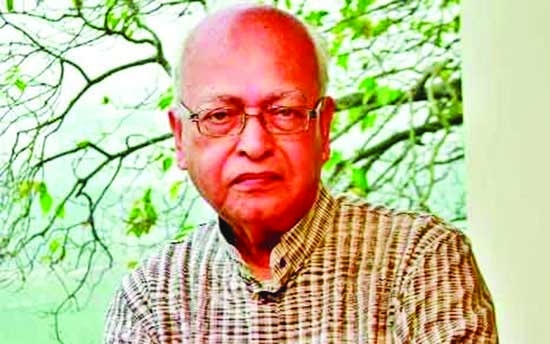 Noted educationist Borhanuddin Khan Jahangir has passed away at the age of 84.The former Dhaka University professor of political science breathed his last around 12pm on Monday at his home in Gulshan, said Bangla Academy Public Relations Officer Pias Majid. Prime Minister Sheikh Hasina on Monday expressed deep shock and sorrow at the death of eminent educationist, litterateur and art-critic Dr Borhanuddin Khan Jahangir.
In a condolence message, the prime minister said the working life of Ekushey Padak-winning educationist will continue to inspire all. Sheikh Hasina prayed for eternal peace of the departed soul and conveyed profound sympathy to the bereaved family. Borhanuddin Khan had been bed-ridden for seven months with old-age complications.
His nephew, Muntasir Uddin Khan Mamun -- a professor of history at Dhaka University - said that his body will be taken to his ancestral home for burial and funeral. Borhanuddin was born on Jan 9, 1936 in Kachua. He began his career as a lecturer in Dhaka University's Political Science department. Later, he became a professor there. He was also the vice-chancellor of National University.
He received the Bangla Academy Literary Award in 1969 for his contribution in short stories and Ekushey Padak in 2009 for his impact in Education and Research.Borhanuddin Khan is elder brother of former Home Minister and veteran Awami League leader Muhiuddin Khan Alamgir.