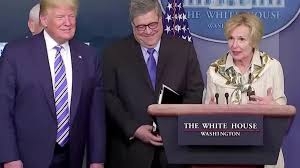 US President Donald Trump - under fire for labelling Covid-19 the "Chinese virus" - has said Asian Americans should not be blamed for the outbreak.
He said it is "very important that we totally protect" Asian Americans, whom he praised as "amazing people".
Mr Trump spoke out amid rising reports of verbal and physical attacks on the community amid the pandemic.
Coronavirus is still spreading in the US, which currently has more than 43,000 confirmed cases and 533 deaths.
At a White House coronavirus task force news conference on Monday, Mr Trump said: "It is very important that we totally protect our Asian American community in the United States and all around the world.
"They're amazing people and the spreading of the virus is not their fault in any way, shape or form.
"They're working closely with us to get rid of it - we will prevail together."
Asked by a reporter why he had spoken out, Mr Trump said: "It seems that there could be a little bit of nasty language toward the Asian Americans in our country and I don't like that at all.
"These are incredible people, they love our country and I'm not going to let it happen."
During press conferences last week, Mr Trump used the term "China virus" and "Chinese virus", rejecting suggestions from reporters that the term was racist.
"It comes from China," Mr Trump said then. "It's not racist at all."
The World Health Organization has issued guidance against "stigmatising certain communities" when naming illnesses.
US lawmaker Judy Chu - a California Democrat and chairwoman of the Congressional Asian Pacific American Caucus - was not impressed by Mr Trump's remarks.
She told NBC News his comments would not "be necessary if he and his supporters had not already endangered so many by spreading this toxic xenophobia".