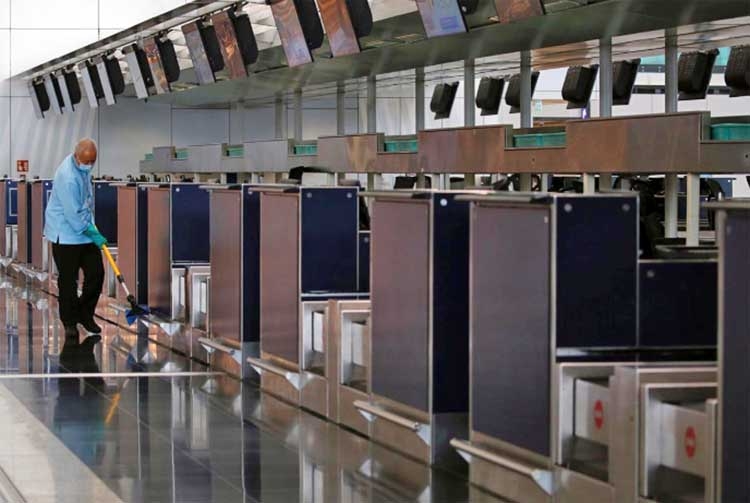 A cleaner works at Hong Kong International Airport. -Reuters
The grounding of virtually all flights by Europe's largest budget airline and European air traffic data on Tuesday highlighted the enormity of the shock to aviation industries from the coronavirus now emptying skies around the globe.
Ryanair (RYA.I) told customers it had virtually written off the next two months, while European air traffic management body Eurocontrol said volumes on Monday were down more than 75% from the same day last year. "We do not expect to operate flights during the months of April and May at this time," Ryanair boss Michael O'Leary said in a message to customers.
The coronavirus pandemic is also taking a heavy toll on aerospace manufacturing, with Boeing (BA.N) saying it would halt production of most widebody jets and European rival Airbus (AIR.PA) resuming only partial output on Monday after a four-day shutdown as suppliers cut jobs.
Global airlines revenues seen down by $250 billion this year: IATA Wizz Air suspends all flights to and from Varna over coronavirus With flights grounded because of a collapse in demand over fears of contagion and reinforced by air travel restrictions, airlines, planemakers and their suppliers are under pressure to save cash to ride out the squeeze in liquidity.
Ratings agency Moody's has cut its outlook for the aerospace and defence industry to negative from stable and warned that, the damaged balance sheets of most airlines would hurt demand for new aircraft even after the market begins a recovery.
Global passenger capacity fell 35% last week, the worst since the start of the crisis, according to data from airline schedules business OAG, which said deeper cuts are likely in the coming weeks. More than 2,500 planes have been grounded this year, data from Cirium shows, with taxiways, maintenance hangars and even runways at major airports turning into giant parking lots.
Asian jet fuel refining margins - the difference in value between raw crude and the refined product - turned negative on Tuesday for the first time in more than a decade, suggesting there was no recovery timeframe in sight for the aviation industry.
Large U.S. carriers have drafted plans for a possible halt in U.S. passenger air traffic, four officials said on condition of anonymity, though there is no plan in place and U.S. President Donald Trump said on Monday that he was not considering a domestic travel ban.
Boeing faces the shutdown of key assembly lines for the second time in a year after being forced to halt production of its grounded 737 MAX aircraft in January.
Production of long-haul jets such as the 787 and 777 in Washington state will pause for 14 days from Wednesday, plunging the world's largest industrial building - Boeing's wide-body plant at Everett north of Seattle - into silence for the first time in memory.
As the crisis deepens, Democratic U.S. lawmakers have proposed that some of the roughly $58 billion in proposed emergency aviation loans be changed to cash grants to cover payroll costs.

Embraer (EMBR3.SA), meanwhile, will furlough all non-essential workers in Brazil, where it makes regional jets, the world's third-largest aircraft manufacturer said on Sunday. Joining the list of temporary shutdowns is Bombardier (BBDb.TO), which is suspending Canadian production of business jets, said a source familiar with the matter.
Airbus called for strong government support for airlines and suppliers but stopped short of calling for direct aid for the company, which has secured an extra 15 billion euros ($16.14 billion) of commercial credit lines.However, the planemaker has told officials privately that it may need European government help if the crisis lasts for several months, Reuters reported last week.
Struggling Norwegian Air (NWC.OL), which has grounded most of its aircraft and temporarily laid off 90% of staff, said on Tuesday that it had secured an initial cash infusion of 300 million Norwegian crowns ($26.6 million) from the government.
Industry executives said that a major source of alarm was the global chain of thousands of suppliers who would be severely hurt by abrupt stop-start movements in plane output. Many have already taken a hammering from the year-long 737 MAX grounding.
The International Association of Machinists and Aerospace Workers on Monday said that more than 500,000 U.S. aerospace production jobs could be in jeopardy and called for a relief package that included provisions to protect against layoffs.
----Reuters, Dublin