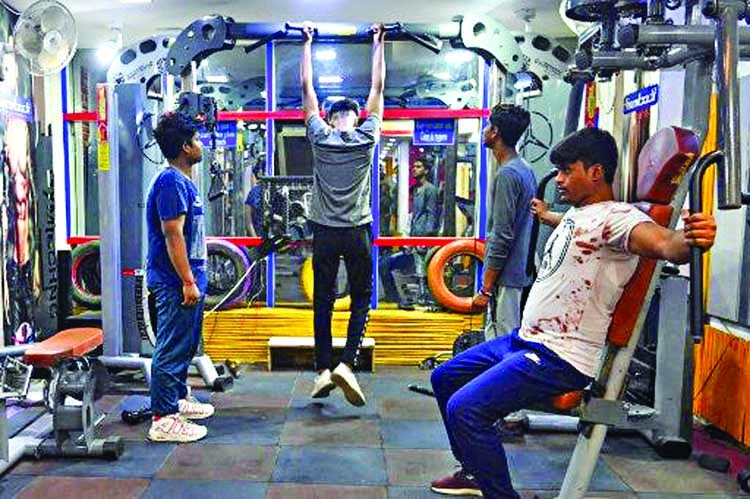 India has a booming bodybuilding culture and for many, extra hours are needed to burn off unwanted fat, no matter the risks. -AFP
While top gym chains in India are shuttered over the coronavirus pandemic, many workout dens are defying government orders of a lockdown by staying open for their muscle-bound customers.
Exercise fanatics say their need to pump iron is worth the risk, and the gyms' owners keep opening up despite facing police action, meaning the dumbbells carry on being lifted and the treadmills stay turning.In one cramped gym in a crowded Delhi backstreet, around 20 people are waiting for a turn on one of the 10 machines.
"There is fear because every action or government circular comes down to how good the police are," says the owner, who gives only his first name, Rajeev. "It is also a matter of our livelihood."Rajeev says that shortly after he opened his gym in 2016, the government cancelled more than 80 per cent of bank notes to counter the black economy. That badly hit businesses, as did a new national sales tax introduced in 2018.
"So we have been under the hammer and now cannot afford to shut down," he said. Authorities have been cracking down on the gyms, with police in Delhi arresting two owners on Sunday for illegally operating. Four criminal cases were also filed against gyms elsewhere in the capital, police said.
India, which has reported 10 deaths from around 500 virus cases, staged a one day curfew on Sunday to test its pandemic defenses. Authorities then ordered drastic new restrictions on movement.In between barking out orders to his sweat-soaked members and staff, Rajeev tells how he believes bodybuilders can fight the virus with strong immunity and that India's climate will help.
"India is a very hot country so when the temperature rises and I have learned that temperatures between 25-26 degrees centigrade can destroy this virus," says Singh, highlighting a widely-held belief in the country of 1.3 billion people.
The World Health Organization has said there is no proof that heat kills the coronavirus."I have taken action, there is sanitiser. If your immunity level is very strong then you can fight this virus," Rajeev insists.While schools, colleges, swimming pools are closed, and top sporting events like the Indian Premier League cricket are suspended, dozens of gyms are operating across Delhi.
India has a booming bodybuilding culture and for many, extra hours are needed to burn off unwanted fat, no matter the risks."I am 13 kg overweight and I'm doing a 50-day challenge," one 27-year-old university researcher told AFP as he wiped off sweat after a 20 minute run on a treadmill.
"Everyday I go to my room, I ignore the fact that there is coronavirus and keep on motivating myself that I have to go to the gym," he said."This virus is secondary - if I am healthy then I can kill the virus," he said, adding he would keep coming to the gym despite the threat of police action if caught
----AFP, New Delhi