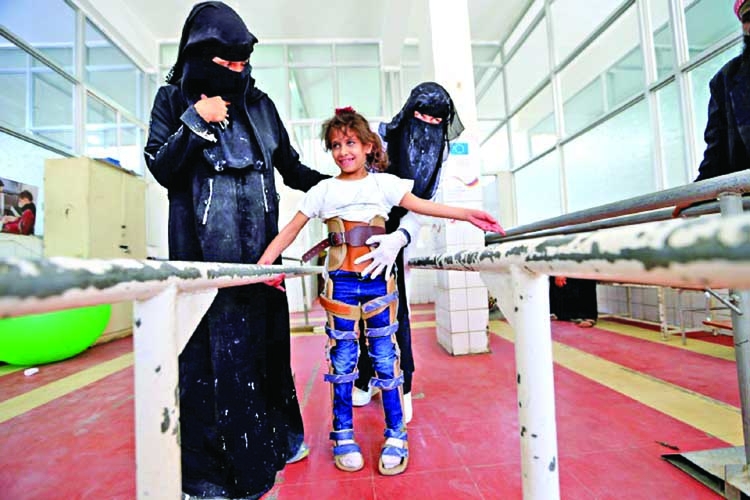 Save the Children said more than 7,522 youngsters have been killed or maimed over the past five years in the Yemen conflict. -AFP
The long war in Yemen has had a "devastating impact" on the mental health of children, with more than half saying they feel sad and depressed, Save the Children said.The government backed by a Saudi-led military coalition has been battling the Iran-aligned Huthi rebels for more than five years in a conflict that has plunged the country into what the United Nations says is the world's worst humanitarian crisis.
"More than half the children surveyed said they struggle with feelings of sadness and depression, with more than one in ten saying they feel that way constantly," the charity group said in a report. "Around one in five children said they are always afraid and always grieving."
The group said the survey was the largest of its kind among children and parents since the war broke out. Save the Children interviewed 629 children between the ages of 13 and 17 and 627 parents and other caregivers in three Yemeni regions.The study comes at a time when Yemen, which has long been the most impoverished country in the Arabian Peninsula, faces the looming threat of the novel coronavirus.
While it has not recorded any COVID-19 cases to date, the possibility of an outbreak threatens the already fragile healthcare system. Save the Children said the conflict has forced two million children from their homes and at least two million out of their schools. More than 7,522 youngsters have been killed or maimed over the past five years, the report said, adding some 2.1 million children under five are acutely malnourished.
"The children we spoke to are terrified," said the organisation's CEO Inger Ashing. "This is what five years of war does to the mental wellbeing of children." "With COVID-19 now a worldwide epidemic, the potentially devastating threat of a coronavirus outbreak in Yemen makes urgent action to pressure parties to end the war more important than ever."
---AFP, Sanaa