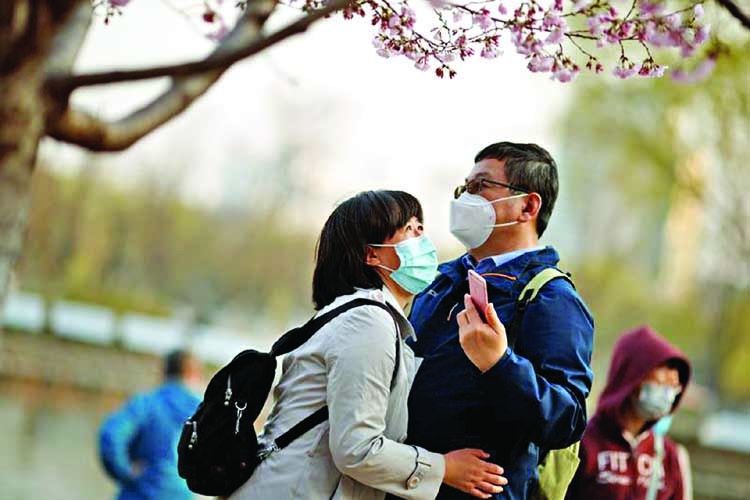 People wear protective masks while they mingle at a park, as the country is hit by an outbreak of the COVID-19, in Beijing, China on Monday. -Reuters
China cannot afford to let its guard down when it comes to combating the coronavirus, with the country still at risk from sporadic infections as well as those from overseas, a health official said on Tuesday. The virus epicenter of Hubei said on Tuesday that it would relax restrictions on passengers leaving the province starting from Wednesday, with the capital Wuhan set to follow in April.
The move came even though the number of new infections on the Chinese mainland doubled on Monday, driven by an increase in cases travelling into the country from overseas. Mi Feng, spokesman with the National Health Commission, told a press briefing that "prevention and control work could still not be relaxed". At the same briefing, Wang Guiqiang, director of the infectious disease department at the Beijing First Hospital, said initial appraisals of the coronavirus showed that its infectious period was longer than SARS and influenza.
China does not include asymptomatic or presymptomatic patients in its overall case list, prompting concerns on social media that potentially infectious people might cause new outbreaks once travel restrictions are eased.However, Wu Zunyou of the China Center for Disease Control and Prevention told the briefing that there was no risk they would become a new source of transmission for the virus, saying that they have also been isolated.
Her, The global shutdown continued to throw up horrifying tales; soldiers in Spain tasked with fighting the outbreak reported finding abandoned elderly people some dead at retirement homes.And on the deserted streets of New York, one psychologist who ventured out voiced fears over the long-term mental health effects on everyone affected.
"I'm scared for me and patients that this could go on" for months, said Lauren, who declined to give her surname. Anxiety and depression "all gets heightened at a time like this," she added. The financial impact of economies grinding to a halt continued to unnerve policymakers, who opened the spigots and flooded the markets with yet more cash their latest effort to keep the wheels turning.
In the United States, the Federal Reserve unveiled an unprecedented bond-buying program, in a move not seen since the global financial crisis more than a decade ago.The Fed, which has already slashed interest rates to record lows, said it will buy unlimited amounts of Treasury debt and take steps to lend directly to small and medium-sized firms hammered by a countrywide lockdown.
Asian markets cheered the news, with Tokyo, Hong Kong and Seoul rocketing in their latest rollercoaster session. That upswing came despite US politicians' failure to sign off on a $2 trillion package that President Donald Trump says is aimed at supporting ailing enterprises and helicoptering cash to American families.
His opponents say the bill is too heavily weighted to bailing out big business.The British government, which has faced accusations it dithered over the health crisis and needlessly allowed schools to remain open far longer than European counterparts, came into line on Monday.