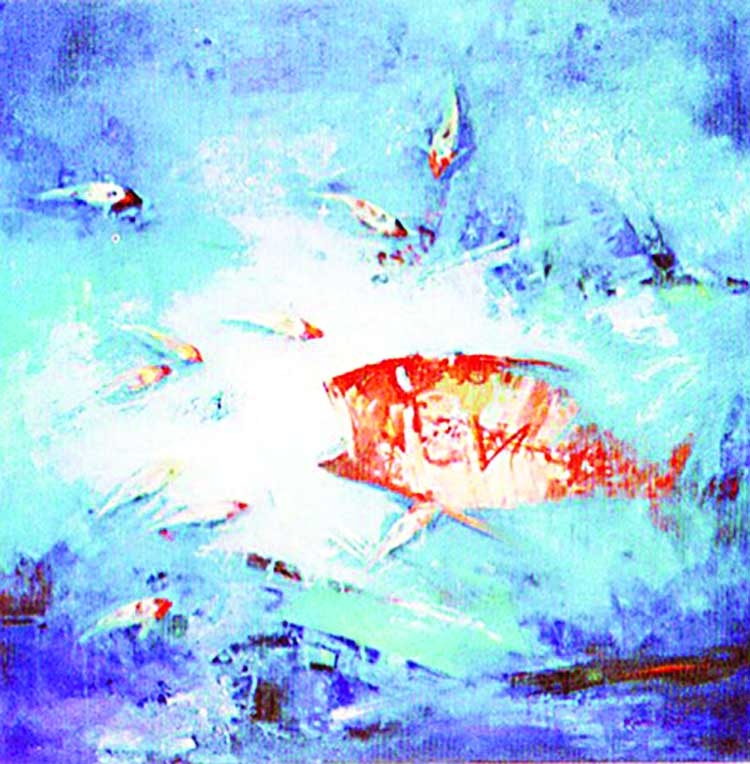 Artist couple Sadhana Islam and TA Kamal Kabir has portrayed nature and tradition of Bengal in their duet show under way at Gallery Chitrak in the capital's Dhanmondi.
The 13-day exhibition titled 'Painters Ever After' features over 60 paintings created using mediums like acrylic, batik, oil, tempera, egg tempera and others which began on March 13.
The artworks tackle subject matters like scenic beauty of Bengal, tradition, animals, birds, women, motherhood, fishes and others.
Sadhana Islam is now working as a vice-principal at GandariaKisholoy Kochi-KancharMela Kendra. She completed her BFA from Bangladesh Government College of Arts and Crafts, now faculty of fine arts of Dhaka University, in 1974.
'I wanted to portray rural Bengal along with our tradition. All of my works portray country's origin along with the beauty of nature. I also introduced some elements of folk culture in some of my work,' Sadhana Islam said.To mention a few works, an untitled oil painting shows people are travelling by some well-decorated traditional boats with their family.
Another untitled acrylic painting shows a boy playing flute wearing a traditional dress who is set against a background covered with lush green nature.Egg tempera on board painting shows a woman combing another women's hair while squatted on the ground. The background of the painting shows various lines and forms synchronized with various colors including rose, yellow, green and blue.
TA Kamal Kabir was born in 1951 in Dhaka. He also completed his BFA from Bangladesh Government College of Arts and Crafts of Dhaka University in 1974. He is now working as a freelance artist.
'I have tried to portray the underwater scene through my works. While working underwater, I feel serenity from my conscious and subconscious mind. Sky is the dominating color in my works, as water has no color of its own.
The paintings will give the viewers a glimpse into various conditions of fishes under the water,' pointed out TA Kamal Kabir.To mention a few works by Kamal Kabir, an acrylic painting shows a big fish eating up small fishes under water and the color of the water is blue.
Another acrylic painting shows a shark is coming towards another shark eating its prey and the entire water color is red with the blood from the flesh of the victim.An oil painting shows a sketchy figure of a fish which has been shattered. The background of the fish is covered by various lines, forms and dots underwater.The exhibition will end today.