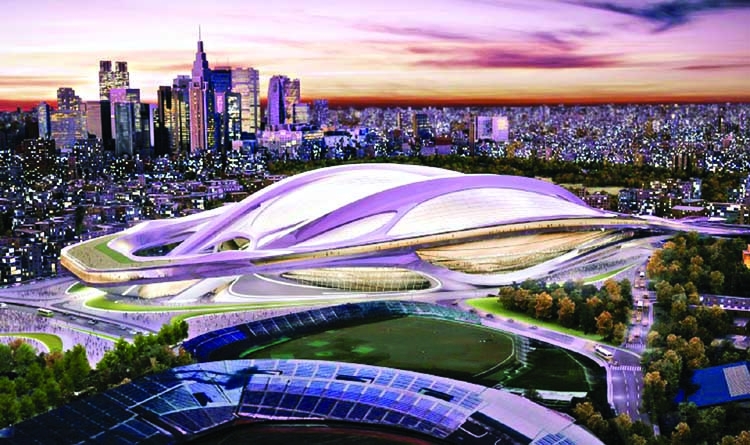 An artist's impression of the original design for the Tokyo 2020 Olympic Stadium, which was scrapped after costs spiraled. -AFP
Olympic officials regularly lauded Tokyo as the best prepared host city they had seen. But no one could have planned for the coronavirus pandemic that has forced an unprecedented postponement of the 2020 Games.
And while organisers won praise, a plagiarism scandal, corruption charges and budget woes all clouded the horizon even before the virus outbreak threatened the Games. Here, AFP Sport chronicles the path to postponement.
2013: Tears of joy
TV news presenters burst into tears and thousands of people erupt in screams of delight as the IOC awards the Games to Tokyo in September 2013.
With emotions running high, the thoughts of many Japanese turn to the thousands of victims of a devastating earthquake and tsunami in March 2011, with the Olympics seen by some as a golden opportunity to rebuild. Prime Minister Shinzo Abe vows Tokyo will be a "safe pair of hands" with a reputation for efficiency and competence.
2015: Stadium scrapped
Embarrassment for Abe as he is forced to tear up blueprints for the proposed national stadium when costs balloon out of control.
"I have decided we must go back to the drawing board," a red-faced Abe says in July 2015 after public anger over the $2 billion price tag which would have made it the world's most expensive stadium.
2015: Logo dropped
Scandal follows in September 2015 as the logo for the Games is ditched after accusations of plagiarism. Designer Olivier Debie says the design is stolen from his logo for a Belgian theatre and threatens court action before officials withdraw the emblem, saying it "no longer has public support".
2018: Cute mascots
After the logo disaster, there is relief at the smooth rollout of futuristic mascots for the Olympics and Paralympics, chosen by schoolchildren.
Olympic mascot "Miraitowa" -- combining the Japanese words for future and eternity -- is a blue-checked, doe-eyed character with pointy ears, while Paralympic counterpart "Someity" sports pink checks derived from Japan's famous cherry blossoms.
2018: Boxing blues
In an precedented move, the International Olympic Committee strips troubled governing body AIBA of the right to run the boxing competition at the Games over various allegations. There are fears the sport will not feature in the Games, but the IOC opts to organise the boxing tournament itself. 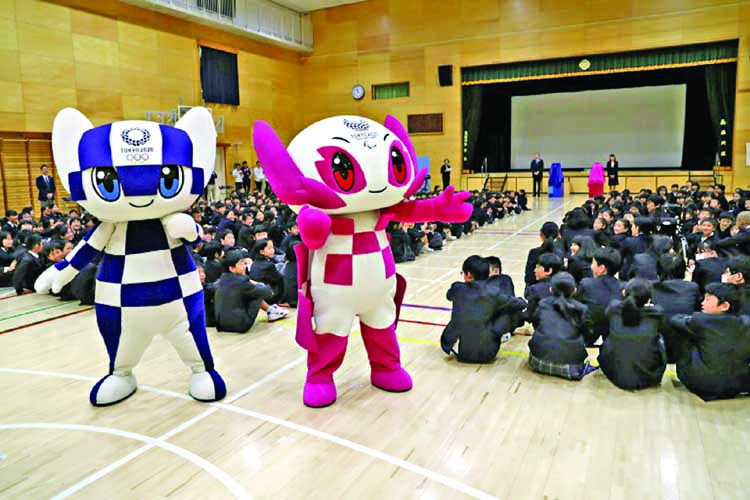 Olympic and Paralympic mascots Miraitowa (left) and Someity delight schoolchildren on a visit to a primary school in Tokyo.     -AFP
2019: French charges
French investigating magistrates in January 2019 charge the former head of Japan's Olympic Committee, Tsunekazu Takeda, as they probe two payments totalling $2.3 million made before and after the Japanese capital was chosen. Takeda says he was "never involved" in any decision-making process over the payment and protests his innocence but he steps down as head of Japan's Olympic Committee.
2019: Marathon move
After warnings against holding the marathon in the middle of Tokyo's sweltering summer, the IOC springs a surprise in October 2019 by shifting the flagship race to Sapporo, 800 kilometres to the north -- and usually cooler in August. Tokyo 2020 organisers are livid, but city governor Yuriko Koike says she has no choice but to accept the decision.
2019: Budget blowout
Organisers unveil the final version of their budget in December, with the Games expected to cost $12.6 billion, although Tokyo 2020 and the IOC are still wrangling over the cost of moving the marathon.
An audit suggests the national government's part of the overall bill, which is supposed to be 150 billion yen, is actually nearly 10 times that. Organisers say auditors are counting expenses only tangentially related to the running of the Games.
2019: Russian ban
Russia's participation in the Games is thrown into question in December, when anti-doping agency WADA bans the country's athletes for four years from global events including the Olympics over manipulated doping data. Russia vows to appeal, but a hearing in March 2020 is postponed as the new coronavirus spreads globally.
2020: Cancellation 'unthinkable'
By late March, the coronavirus outbreak has been declared a pandemic causing more than 325,000 infections and over 14,400 deaths.
With pressure growing for organisers to acknowledge the Games may be hit, Tokyo governor Koike calls cancellation "unthinkable". But the IOC and Japanese officials gradually begin to concede a delay may now be on the cards.
2020: Historic postponement
The IOC and Japan eventually bow to the inevitable and postpone the Olympics in a historic decision.
---AFP, Tokyo