Chattogram Customs House to continue duty in a limited form 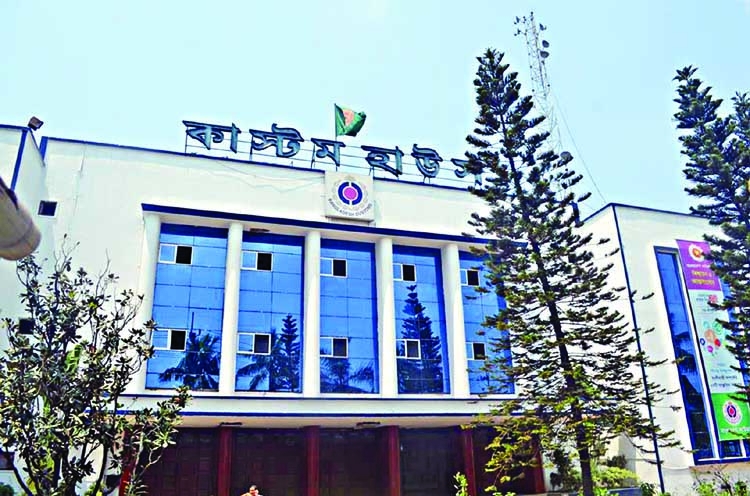 Chattogram Custom House has decided to continue customs duty in a limited form for the time being during the general holidays.
Additional Commissioner of Chattogram Custom House Kazi Md Zia Uddin said the custom-house will work in limited form to discharge emergency food- rice, wheat, pulses- medicines, kits and other equipment from the port to tackle coronavirus.
However, he also urged the concerned to discharge these goods from Chittagong port on an emergency basis within the next two days. Although the government has announced 10 days general holiday due to the outbreak of the coronavirus, customs officials will continue to work to discharge these emergency goods.
Secretary of Chittagong Port Authority, Md Omar Faruk said, those associated with the operational work of the port will also work on normal holidays like Friday and Saturday including ship pilots, security and traffic department personnel. However, he added that they have not yet received any specific guidance on this issue.
92 per cent of the country's import-export is done through the Chittagong port. The C&F (Clearing and Forwarding) Agents submit about 7,000 bills of entry into the customs duty on import and export of Chattogram Custom House.
Chattogram's trade and economy may suffer badly due to the ongoing Coronavirus contagion in China, as the former is highly dependent on the world's second largest economy for its industrial raw materials and finished goods. Nearly 28 per cent of the country's import comes from China, followed by India, nearly 14 per cent.
China supplies mostly fabrics and garment accessories to local clothing manufacturers, on which Bangladesh's major export sector is highly dependent, sector insiders told .
More than 40 per cent of its textile and textile-related goods come from China. Nearly 30 per cent machinery comes from there, according to the Bangladesh Bank statistics. The country's import from China also includes agricultural machinery, mobile phone sets, electrical and electronics goods, fruits, and essential spices etc.
Currently, China is observing New Year, the country's biggest festival, and almost all its factories are closed. So, the actual impact of Coronavirus outbreak that began in Wuhan last month will be felt after the end of New Year vacation, as affected people need at least two weeks to be confirmed.
Any critical situation in the Coronavirus-affected Chinese cities might drag down supply of raw materials from there, and thus affect Bangladesh's export sectors that are struggling in recent months. At present, a number of Chinese people are working in different large infrastructure projects in Bangladesh, including the Padma multipurpose bridge, and they are also contributing to the country's tourism sector as well.
In the meantime, the Chattogram Port Authority (CPA) has taken an initiative for screening goods at the port to stop spreading the Cornovirus outbreak through goods and traffic from China.Bangladesh has already decided to stop issuing on-arrival visa for Chinese nationals amid growing concern over the Coronavirus outbreak, Foreign Minister A K Abdul Momen said on Sunday.
"This is a temporary decision," he told reporters at a press conference at the Ministry of Foreign Affairs ahead of the Prime Minister's Italy visit on February 4-8. Meanwhile, in response to the situation, international airlines are suspending or curtailing their flights to and from China, following a sharp fall in number of passengers, according to Flightradar24.com.
Some major airlines like British Airways and Lufthansa Group (Lufthansa, SWISS, and Austrian) have canceled all their flights to China, while others like United and American Airlines have drastically reduced their schedules, it added.
Import at the Chattogram port has decreased by 17 percent in a month in the wake of the coronavirus pandemic, with readymade garment raw material recording the highest fall, according to data of the Customs House, Chattogram. In January this year, over 1.06 crore tonnes of products were imported through the port.
The number decreased to 88.18 lakh tonnes in February. Export also shrunk within this period at the Chattogram port.  Officials feared exports and imports would slide further this month if the coronavirus situation did not improve. They said this would drastically affect the market of all import-based products, including apparels.
The World Health Organization has already declared the coronavirus a pandemic. As of Friday, there were 1.3 lakh confirmed cases around the world and 4,960 deaths. The deadly virus has spread to 116 countries.
In Bangladesh, coronavirus has infected three people, including two men and a woman. Mahbubul Alam, president of the Chattogram Chamber of Commerce and Industry, said imports had fallen not only from China but also other countries that had seen the coronavirus outbreak.
"Imports from and exports to European countries have declined too. We expected the situation to have improved by January or February, but it is deteriorating," he explained. He said import-based product prices would go up further and industries would be affected if normalcy did not return.   The Chattogram port is the country's major seaport and the gateway for 92 percent of import and export trades.

More than 6,000 products are imported and exported via this port. Most of the products imported under bond facilities are raw materials for the clothing industry.   AM Chowdhury Selim, vice-president of the Bangladesh Garment Manufacturers and Exporters Association, said import of apparel raw material had fallen sharply in the last two months.
Many factories are on the verge of closure due to the shortage of raw material, he said.   Md Shahadat Hossain is the manager of Taj Scientific, a leading medical equipment importer. He said import of a variety of equipment and products, including wheelchairs, nebulisers and surgical masks, from China was closed.
"We could not open letters of credit as shipment is totally suspended. The Chinese exporters are not taking any orders," added Shahadat.

Abul Bashar Chowdhury, chairman of BSM Group, said import of garlic and ginger was closed due to the coronavirus outbreak.     We usually import these from China ahead of Ramadan, he said."Also, we are unable to open letters of credit for importing electrical equipment. This has caused imports to decline," added Bashar.