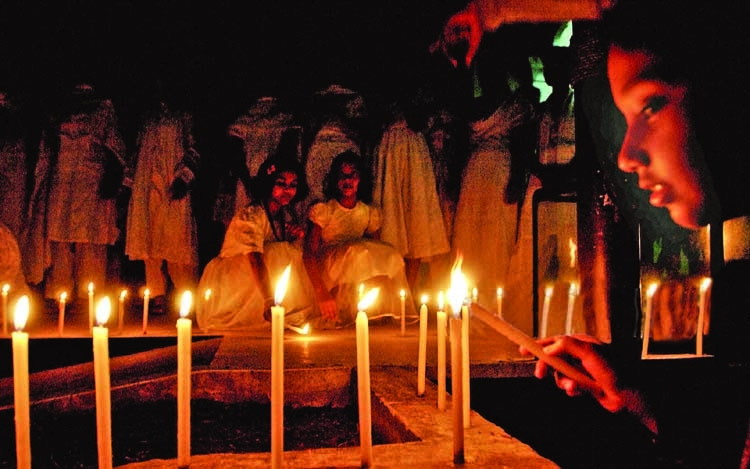 A Bangladeshi school girl lights a candle as a mark of respect to victims on the occasion of 'Black Day' at the Liberation War Museum in Dhaka, 25 March 2004. Hundreds of people gathered to pay their respect to the victims of a 25 March 1971, atrocity b
Today is the 'Genocide. On the black night of March 25 nearly five decades ago, Pakistani occupation forces launched brutal genocide codenamed 'Operation Searchlight' on the unarmed Bengalees.
This time the government and political, social and cultural organizations including the ruling Awami League have suspended all programs in the wake of the deadly coronavirus outbreak.President Abdul Hamid and Prime Minister Sheikh Hasina issued separate messages on the eve of the 'Genocide Day'.
In his message, the President said the brutal genocide 'Operation Searchlight' carried out by Pakistani occupation forces on March 25 is a barbaric and tragic incident in the history of the Bangalee nation.He recalled with profound respect the martyrs of 1971 Liberation War.
The President said Pakistani occupation forces unleashed the brutal genocide simultaneously in Dhaka and all over the country including Dhaka University campus, Rajarbagh Police Lines, Pilkhana EPR (Now BGB), Jashore, Rajshahi, Rangpur, Saidpur, Cumilla, Sylhet and Chattogram.
Abdul Hamid urged all irrespective of opinions and party affiliation to make contribution from respective positions to materialize the Vision 2041 declared by the government to turn the country into a developed and prosperous one.
Prime Minister Sheikh Hasina, in her message, said March 25 is the most dreadful day in the life of the Bangalee Nation.
On this day in 1971, she said, one of the most horrific and brutal genocide of the world history took place in Bangladesh.
She paid her deep homage to the greatest Bangalee of all times, Father of the Nation Bangabandhu Sheikh Mujibur Rahman, the four national leaders, martyred freedom fighters of the Liberation War and those dishonored women whose supreme sacrifices have given the nation an independent Bangladesh. She extended her sympathy to the wounded freedom fighters and the members of martyr's families.
The Bangalee Nation under the leadership of Bangabandhu fought against the oppression and deprivation of the Pakistani rulers for 23 long years, she said.
The premier said Awami League led by Bangabandhu secured an absolute majority winning 167 of the 169 seats of East Bengal in the General Elections of 1970. But the Pakistani rulers refused to hand over power to the Bangalees, she added.
She said calling for independence at the then Racecourse Ground on 7 March 1971 Bangabandhu declared 'The struggle this time is the struggle for our emancipation; the struggle this time is the struggle for independence, Joy Bangla.'
Yahya Khan, the president of Pakistan, began to waste time in the name of negotiations and assembled troops in East Bengal. On 25 March, Yahya Khan went to Pakistan secretly giving the order of genocide in the name of Operation Search Light, she added.
She said the Pakistani occupation forces began massacre of innocent and unarmed Bengalis on that black night.The premier said only in nine months, Pakistani forces and their local collaborators-Rajakar, Al-Badar and Al-Shams killed three million people all over the country, two lakhs women were violated, thousands of homes were set fire and looted, nearly one crore people were driven out of their homes and they took refuge in India and more than three crore people were displaced internally.
The government of the Father of the Nation Bangabandhu Sheikh Mujibur Rahman framed the International Crimes (Tribunals) Act-1973 for the trial of the war criminals, she added.
Sheikh Hasina said under the law, trial of many offenders had begun. But assuming to power illegally Ziaur Rahman stopped the trial of the war criminals and released them, she said adding not only that, he made the war criminals partner of the state power.
Later, Khaleda Zia also made Nizami-Mujahid, the two notorious collaborators of genocide, cabinet members allowing them to hoist national flag in their vehicles and houses, she added.
The prime minister said the Awami League government has been conducting the war crimes trial since assuming to power in 2009 and some of the verdicts of the trial have already been executed.The trial of the war criminals will go on. "We have taken all-out initiatives to achieve international recognition of genocide of 1971 in Bangladesh," she said.
Sheikh Hasina said the observance of 25 March as 'Genocide Day' will be regarded as nation's memorial of eternal respect and testimony to the martyrs of the Liberation War.
"Let us get united with the spirit of the great War of Liberation and build a hunger-poverty free happy-prosperous Golden Bangladesh as dreamt by the Father of the Nation," she said. She wished all the programs of Genocide Day a grand success.
National dailies will publish special supplements and television channels will air special programs highlighting the significance of the day. On the black night of March 25, 1971, the Pakistani military junta carried out mass killing in Dhaka as part of their blueprint to thwart the Awami League's assumption of office following the victory in the elections held in 1970.
In the attack dubbed 'Operation Searchlight', the Pakistani forces mercilessly killed the Bangalee members of the then East Pakistan Rifles and police, students, teachers and common people.They killed people indiscriminately, set houses and properties on fire, and looted business establishments, leaving a trail of destruction.
The government of Bangladesh Awami League decided to observe 25 March as 'Genocide Day'.On March 11 in 2017, the National Parliament unanimously passed a proposal to observe the day and the Cabinet on 20 March approved the proposal to observe 25 March as 'Genocide Day'.Subsequently, the cabinet division in a meeting with Prime Minister Sheikh Hasina in the chair, unanimously endorsed the decision on March 20 in 2017.