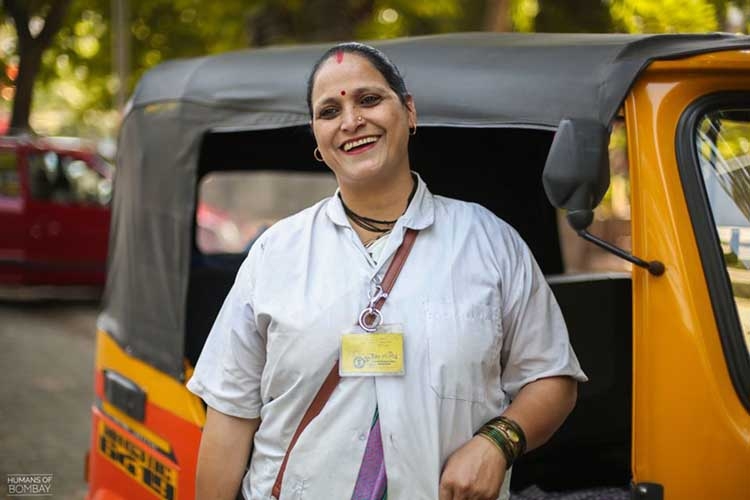 "I've been driving a rickshaw since the past 6 months and I'm the only woman amongst 50 men.
4 years ago, my husband and I faced a financial crisis -- the shock was so heavy for him, he developed a mental disorder and hasn't been able to work since. At the time, my daughters were really young and if I hadn't taken over the reins, we would've landed on the streets.
We survived on our savings for 9 months, but I knew that eventually we'd be broke. So I tried to seek work at other people's houses, but I was turned down everywhere. I went door to door for weeks until finally I found work as a part time insurance agent and a second job as a security guard. The salary was less and the hours were crazy-- I'd come home at 4 AM and had to report to work by 9 AM. Before leaving, I'd prepare meals and do the house chores; while also looking after my husband. I hardly got to see my kids, but this was all for them.
When the government announced an initiative for women rickshaw drivers, I jumped at the opportunity! I took up a training course and bought a rickshaw worth 2 lacs on loan; hoping things would turn around. I joined the other drivers in the area; not knowing that I wasn't welcome… Everyday, they'd abuse me and not let passengers sit in my rickshaw. They'd surround me and smash my rickshaw's head and tail lights, puncture its tyres and even give death threats. I'd break down everyday, but giving up wasn't in my dictionary.
I kept going for my family and didn't take my struggles home. Today, I work close to home and get to spend time with the kids. I've even begun earning more because I got a part time job as a female bouncer on weekends! Just recently I took my daughters shopping for their birthdays-- I bought them something new after a year! Just seeing their faces light up made me the happiest mom in the world.
Every day, they tell me, 'Wait till we start earning mumma! We're going to buy you as many houses you want!' But I'm actually so happy to work, proving to myself and the world, that this woman isn't stopping anytime soon -- she's zooming away in her rickshaw to new heights!"    Humans of Bombay, Fb