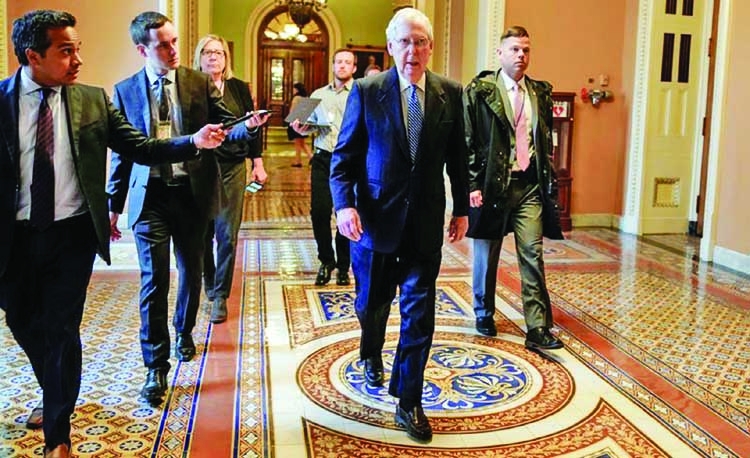 Senate Majority Leader Mitch McConnell (R-KY) arrives during negotiations on a coronavirus disease (COVID-19) relief package on Capitol in Washington, US, Monday. -Reuters
US senators will vote on Wednesday on a $2-trillion bipartisan package of legislation to alleviate the devastating economic impact of the coronavirus pandemic, hoping it will become law quickly so they can get out of Washington.
Top aides to President Donald Trump and senior Senate Republicans and Democrats announced they had agreed on the unprecedented stimulus bill in the early hours of Wednesday, after five days of marathon talks.
"We're going to pass this legislation later today," Republican Senate Majority Leader Mitch McConnell said. The massive bill is expected to include a $500 billion fund to help hard-hit industries and a comparable amount for direct payments of up to $3,000 to millions of U.S. families.
It will also include $350 billion for small-business loans, $250 billion for expanded unemployment aid and $150 billion for various healthcare initiatives, including $100 billion for hospitals and related health systems.
It aims to flood the U.S. economy with cash in a bid to stem the impact of a pandemic that has killed more than 660 people in the United States and sickened more than 50,000, shuttered thousands of businesses, thrown millions out of work and led states to order 100 million people - nearly a third of the population - to stay at home. "This is not a moment of celebration, but one of necessity," Senate Democratic Leader Chuck Schumer said.
The bill is expected to pass the Senate easily, more so because Senator Rand Paul, a Republican who was the only senator to vote against an earlier round of emergency virus funding, may be unable to vote after testing positive for the disease. If passed, the unprecedented rescue package, which Schumer called the largest in U.S. history - would be the third approved by Congress this month to counter the impact of the crisis.
To become law, the measure must pass the Republican-led Senate and Democratic-led House of Representatives. House Speaker Nancy Pelosi was consulted during negotiations on the bipartisan Senate deal, struck after Democrats twice blocked a measure written by Republicans. Aides to Pelosi did not immediately respond to a request for comment on her view of the bill.
It also must be signed by Republican President Donald Trump, who said on Tuesday he wanted Americans to end "social distancing" restrictions intended to slow the spread of the virus and return to work by Easter, April 12.
That worried health officials, who fear ending the lockdown too soon could bring more virus-related deaths.
Treasury Secretary Steven Mnuchin, the administration point man for talks, told reporters Trump "absolutely" would sign the bipartisan stimulus agreement if it passed Congress.
Talks on the deal kept the Senate in Washington as the virus' impact on the United States increased dramatically. Members of the House of Representatives left Washington 10 days ago.
While stuck in Washington, many senators told aides to work from home to lower the risk of contagion, Paul announced his positive test and a handful of other lawmakers self-quarantined, because they had been exposed to Paul or others with the illness.
---Reuters, Washington