Tigers donate half of their monthly salary to govt fund 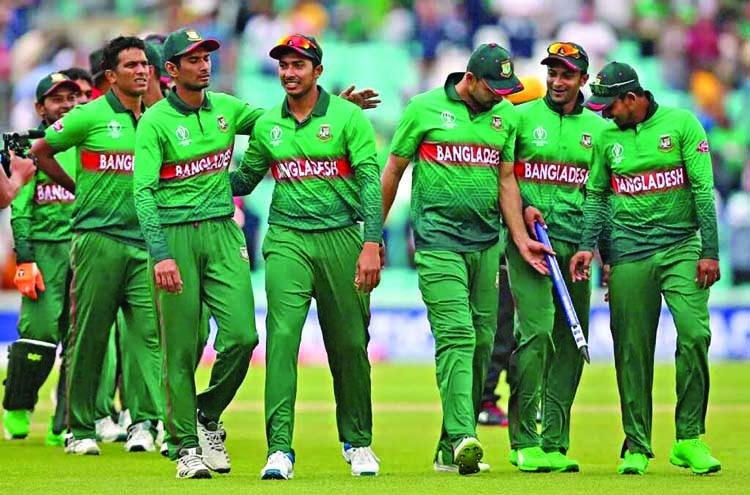 Bangladesh cricket team celebrate after winning a match during the ICC World Cup 2019 in England. -ICC
Bangladesh national cricketers came up with decision to donate 50 percent of their salary for one month to the government fund against coronavirus under the initiative by Tamim Iqbal.
All of 17 players who are in the central contact donated 50 percent of their salary, and other 10 players, who were part of the national team during the last three years, also joined them.
Bangladesh's ODI captain Tamim Iqbal donates BDT 325,000, which is the 50 percent of his total monthly salary of BDT 650,000. Mushfiqur Rahim whose month salary is BDT 620,000 donates BDT 310,000. Like them all of the players are donating the 50 percent of their monthly salary.
Mashrafe Bin Mortaza who has recently gave up the ODI captaincy, also were the 27 players who has recently played for the national team. As per previous contract, Mashrafe's monthly salary was BDT 450,000 form which he donates BDT 225,000.
Senior players like Tamim Iqbal, Mushfiqur Rahim took their social media handle to disclose the matter. Both of them however also gave a statement through their facebook, which is almost same. "The whole world is fighting against coronavirus pandemic. The outbreak of coronavirus is also increasing in Bangladesh. We, the cricketers, are trying to aware people in social media to take necessary steps to prevent this pandemic," the statement reads.
"But we believe we have many more things to do rather than just increasing awareness among people. 17 players, who are in the central contract of BCB, and 10 other players who took part in recent series for national team; in total we are 27 cricketers giving half of our monthly salaries to help against coronavirus.
After excluding the tax the amount might be approximately 25 lakh around," it further reads. "May be this fund is not that much compare to the fight against coronavirus. But if we all together can contribute from our own position, then in combined, it might be a bigger step to fight against coronavirus. If we can take the responsibilities and try to make contribution wholeheartedly rather than criticizing others.
then we can win the war against coronavirus. Everyone please stay home, stay safe. Be well and keep our country safe."
As per BCB's contract policy, when a cricketer represents Bangladesh from outside the central contract, he gets a salary of his grade as long as he plays for the Tigers. Earlier, all cricketing events in Bangladesh were postponed indefinitely.
The Bangladesh Cricket Board had started Dhaka Premier Division Cricket League, but after a round, the league was postponed. Before that, a two-match T20I series between Asia XI and World XI has also been postponed, which was scheduled to celebrate the birth centenary of Bangabandhu Sheikh Mujibur Rahman.
Bangladesh has so far reported five deaths from the coronavirus. Besides, the total number of infected people in the country is now 27 with the recovery of seven others. Meanwhile, the death toll from the coronavirus or COVID-19 has reached 18,895 globally as of Wednesday. It has so far infected 422,629 people around the world, according to worldometer.