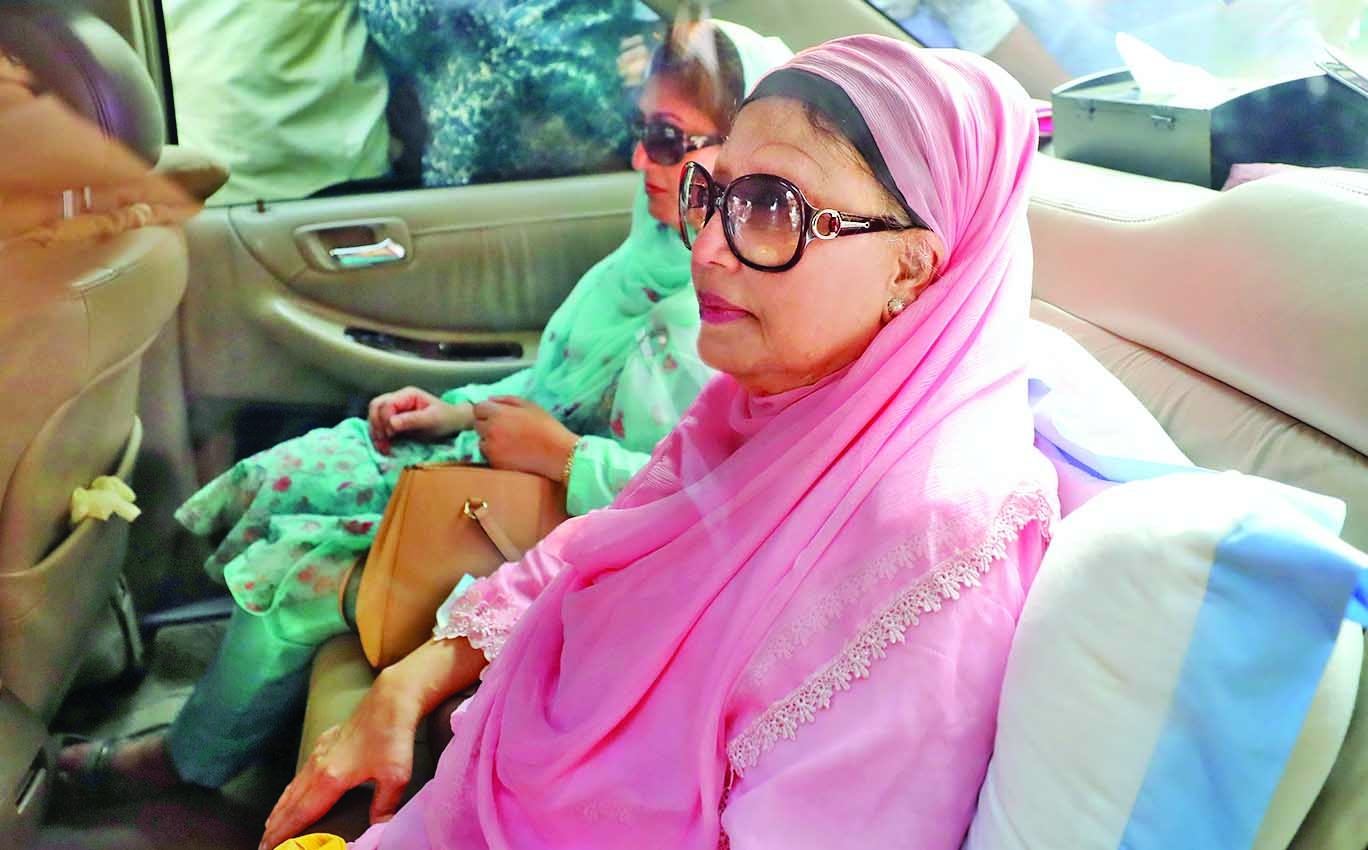 BNP Chairperson Khaleda Zia was released from BSMMU on Wednesday after 25 months behind bars. -Zahidul Islam/AA
BNP's senior leaders kept saying that the release of Khaleda Zia was not possible without government's will. The executive side dismissed such claims saying that the issue was lying with the court. Ultimately the former Prime Minister got released on Wednesday within 24 hours of government's decision to free her.
BNP chairperson freed from Bangabandhu Sheikh Mujib Medical University (BSMMU) at around 4:15 pm where she had been undergoing treatment there since April last year with multiple complications.
After Prime Minister Sheikh Hasina's nod, the Home Ministry passed the papers relating to Begum Zia's release to jail authorities at around 2:00pm on Wednesday.Amidst deadly coronavirus fears, a huge crowd thronged BSMMU to see Khaleda Zia.
Her personal security forces with five cars and a microbus were seen at the hospital premises while her Nissan Patrol was waiting to pick her up.A good number of BNP leaders including secretary general Mirza Fakhrul Islam and Begum Zia's family members were waiting at the hospital.
After completion of formalities, the authorities brought Khaleda Zia down on a wheelchair from sixth floor.The situation turned chaotic when leaders and activists of BNP gathered at the hospital. Mirza Fakhrul Islam Alamgir was seen requesting all to get away from the hospital premises.
Khaleda Zia left BSMMU at around 4:20 and she was directly taken to her Gulshan residence.She reached there at around 5:16pm and got into her residence 'Firoza' along with her family members. At that time, leaders and activists of BNP and its associated bodies thronged there ignoring risks of coronavirus. BNP leaders requested supporters not to gather at Begum Zia's Gulshan-2 residence on road 89.
The government released Khaleda Zia by staying her jail sentence for six months on some conditions. As per the conditions, she will have to stay at her Gulshan residence and will not be able to leave the country.
Law Minister Anisul Huq told media on Tuesday that, following the appeal of Begum Zia's family members, Prime Minister Sheikh Hasina directed him to release the BNP chief on humanitarian and old age grounds.He said, the government had decided to free her as per section 401 of Code of Criminal Procedure.
Soon after the directives of the Prime Minister, the Law Minister forwarded his recommendation to the Home Ministry on Tuesday. The Home Ministry forwarded the summary of the papers to the Prime Minister's Office on Wednesday. The Prime Minister gave her nod within hours.
Earlier on February 8, 2018, Khaleda Zia landed in jail after a special court in Dhaka sentenced her to five years' imprisonment in the Zia Orphanage Trust corruption case.
Later, the High Court hiked her jail term to 10 years. The same special court jailed Khaleda Zia for seven years in the Zia Charitable Trust graft case on October 29 in 2018.The High Court and Supreme Court rejected her bail petition several times.