A conversation with Hilton Als 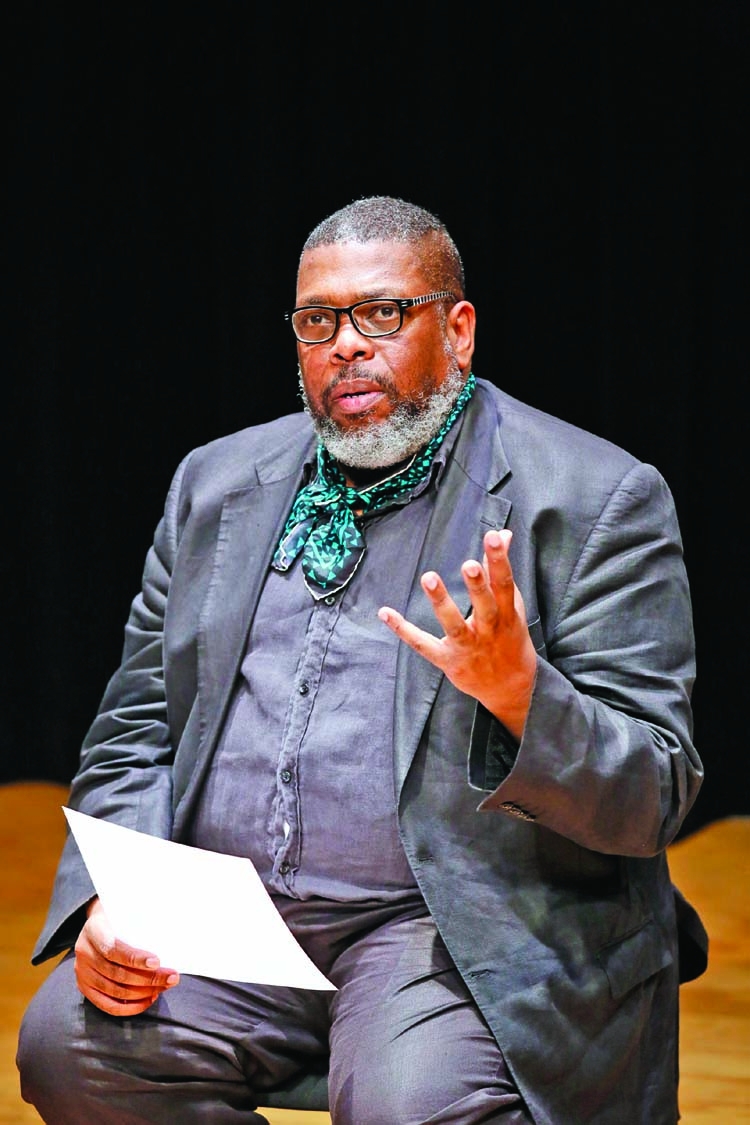 Hilton Als (born 1960) is an American writer and theater critic. He is an associate professor of writing at Columbia University and a staff writer and theater critic for The New Yorker magazine. He is a former staff writer for The Village Voice and former editor-at-large at Vibe magazine. His first book, The Women, was published in 1996 and his second book, White Girls, was a finalist for the National Book Critics Circle Award in 2014. In 2016, he was a finalist for the Pulitzer Prize in Criticism. In 2017, he was awarded the Pulitzer Prize for Criticism: "For bold and original reviews that strove to put stage dramas within a real-world cultural context, particularly the shifting landscape of gender, sexuality and race."
Interview by T. Cole Rachel
You've spent a big part of 2017 thinking and writing about the work of Alice Neel, as well as curating a show of her work. How did it happen?
It happened because I had always thought about her and loved her. And I had just an idea. I went up to David Zwirner six years ago and said, "It would be great if you did a show on Alice Neel's people of color." At the time there were various things with the estate that were shifting, so it would finally be possible to do it. It was a thought I'd had many years ago. The thing that was so fascinating to me about her art was that it was so inclusive of so many different kinds of people. A lot of modern day portraitists only paint the inner circle of people that they know. I think the broadness of Alice's vision is really kind of profound. There is an incredible relationship to emotional accuracy or truth that I love in her work.

Your writing manages to be incisive from a historical perspective, but it's also deeply personal. That seems like a delicate dance for anybody writing about art?
What I am trying to do for myself, always, is honor the delicacy of complication-the idea that people are not really one thing or the other, that there is this amalgamation of all sorts of nerve endings and truths. One of the reasons that I loved Alice Neel so much was her ability to gather all of this information and turn it around in a certain way; make it not literal, but emotionally metaphorical.
Another thing I love so much about Alice (and try to do in my own work) is that she honors the copyrights people have on their lives. They are the author of their own lives. Your job is to not rewrite it, but to make it really important in some way, to show it. To understand that the fictions that are put forth are there to protect themselves, generally, or to give us an idea of something other than the self. Wasn't it Blanche DuBois who said "I know I don't tell the truth, but what ought to be truth."
That's kind of a great thing for people to know about themselves, that the truth is not an empirical thing; just as the "I" is not an empirical thing. I think that's what I love investigating the most-how we put ourselves together.

In your new book about Alice Neel you write:
"Neel believed the world existed on its own terms, and it was our duty-as citizens, as artists-to know as much about it as possible, in order to better live in it and navigate it; to exist among all the broken glass and bottle caps and boys on the street, in a kind of unsentimental wonder."
It feels like as much a statement about your own work as it does about hers.
It's such an incredible opportunity to be an artist. Our job is to empathize with other people, to understand their story, but also to reveal ourselves. We have this luxury-this is our job. It's a luxury to have the time to investigate our own consciousness to understand it better. That's kind of like a million dollars right there. So if we have this luxury, why wouldn't we exploit it? It's our job, really. That's what I feel.
For you, is writing-whether it be essays or criticism-a way of figuring out the world?
Oh, for sure. I mean, I don't really understand what I've said until I've written it. I don't know what I think about something until I've written it down, or found another piece of writing that can articulate it. So I feel, again, that we're in this extremely privileged position of our work being that very thing which is not knowing. Our work as artists is exploring.

In addition to doing different kinds of writing, you also teach. Does teaching serve as a form of investigation?
I think so. Right now I'm teaching one class, it's called "Black Male," and it's all about the black male figure. I had worked on "Black Male" with Thelma Golden at The Whitney a long time ago, and I always wanted to explore it from a literary vantage point. The class involves the writing students at the Columbia graduate school. We're reading people like Frederick Douglass, Booker T. Washington, James Baldwin, Ralph Ellison. It's an opportunity to understand that there's not one figure, but many, many different figures.
Through writing we come to understand something about America, and how the black male figure became seen as this or that. I felt very passionate about having students from other disciplines in the class as well, so there's a painter, a photographer. It's very important for me to have a kind of cultural diversity in the class because I find that, also, the visual people often tend to actually read more or have a different perspective on reading. All the perspectives are important.

Has your way of working, or your approach to when you have to sit down and write something, changed much over the years?
I think it has. I think I'm much more serious about it now, about writing in general. I feel more honored by it and cowed by it. And as I said, it just takes such a long time that you can't be half-assed about it. I think I wasn't really serious about it until the end of my 20s. I think perhaps I spent too much time alone doing it, but that was the only way that I knew how to do it or become better at it.

Your approach to writing criticism is direct. How do you approach talking about someone else's art-answering the questions: Was this good? Was this successful?-in a way that feels helpful and that doesn't denigrate the work in some way?
I feel like it's a communication with another person. When I criticized someone's work, I didn't feel that it was denigrating them. I felt I was trying to talk to them and communicate with them. So I always felt it was more of a conversation than criticism. I just felt like I was talking with someone that I, on some level, wanted to respond to. That the work, either for good or ill, demanded a kind of response. That's what I've always felt.

Does writing criticism feel different from, say, writing an essay about your own life?
Yes. You are limited by facts when you're writing criticism, and you're limited by product. I think that when the product is your own mind, you can just dream. And sometimes that is harder.
Your essays frequently defy traditional genre. You play around with the notions of what an essay can be, what criticism can be, or how we are supposed to think and write about our own lives.
You don't have to do it any one way. You can just invent a way. Also, who's to tell you how to write anything? It's like that wonderful thing Virginia Woolf said. She was just writing one day and she said, "I can write anything." And you really can. It's such a remarkable thing to remind yourself of. If you're listening to any other voice than your own, then you're doing it wrong. And don't.
The way that I write is because of the way my brain works. I couldn't fit it into fiction; I couldn't fit it into non-fiction. I just had to kind of mix up the genres because of who I was. I myself was a mixture of things, too. Right? I just never had those partitions in my brain, and I think I would've been a much more fiscally successful person if could do it that way. But I don't know how to do it any other way, so I'm not a fiscally successful person. [laughs]

Do people ever ask you about writing a novel?
No. I could try, but It feels like a very big, weird monolith to talk about your consciousness as an "I" without being interrupted by other things. That's what I don't understand. That it's just "I" and the world as I see it, when there are a zillion other things coming in. Fictional things that I've written I've not been satisfied with because I didn't put in the real life stuff, too. So maybe I should just go back and do that. But I don't think that one exists without the other for me. Fictional worlds are interesting, but real life is impossible to ignore.


T. Cole Rachel is a writer and teacher.
The interview appeared in thecreativeindependent.com