On music of the Indian Subcontinent 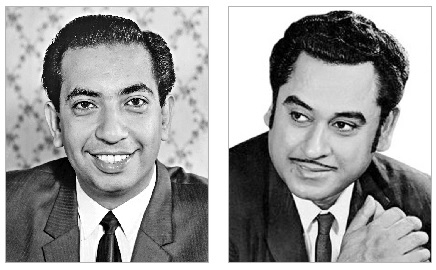 Mahendra Kapoor Kishore Kumar
M Harun Al Rashid
I made some comments on a column on singer Mahendra Kapoor by my favourite columnist Syed Badrul Ahsan, who asked me to send my comments by email. He wanted to publish them. I, somewhat reluctantly, agreed. My embarrassment was high. I have never attempted to write to newspapers.
I believe to write to newspapers, one needs some practice, or a lot of practice, perhaps not as much as writing fiction, but writing is no doubt the hardest job ever, and there is little debate about that. I asked Badrul Bhai to bring more of the legendary singers to light, in his lyrical-magical prose that I always read from start to finish in a breath in any piece I come across. Then my comments on great singers of the Indian subcontinent followed.
I believe Mahendra Kapoor is the last of the line of great singers in the Indian Subcontinent. Among the Bombay based singers, Manna Dey, Mohammad Rafi, Mukesh, Talat Mahmood, Hemanta Kumar (Hemanta Mukhopadhayay), Kishore Kumar, Mahendra Kapoor is a class.
Those who came later - say, Udit Narayan or Kavita Krishnamurti - are not yet ripe for final analysis. As far as my knowledge goes, Mohammad Rafi and Mahendra Kapoor were Punjabis. Mukesh was Hindi-speaking.
I am not sure how much Mohammad Rafi or Mahendra Kapoor could contribute to Punjabi music as Manna Dey, Hemanta Mukhopadhayay and Kishore Kumar could do to Bengali music. Rafi, Mukesh, Kishore Kumar died relatively young. Mahendra Kapoor died not so young, not so old either. Manna Dey had a long life. He died in 2013 at the age of 93.
Among the male singers, he was born before everyone else mentioned in this piece except Debabrata Biswas and died after everyone else. What I gathered about the secret behind his long life was marital happiness, simple diet and physical exercise. My source is many interviews by Manna Dey that I came across.
Manna Dey always praised his contemporaries and he would say that his voice was not as good as the others. But by consistent perseverance and cultivating classical music, he emerged as good as any. Manna Dey said if there was a difficult song, a music director would look for him to sing it. Among male singers, only Mohammad Rafi and he were able to sing the most difficult classical songs.
He, however, never said that others were inferior to him. Despite his humility, I believe Manna Dey was the greatest and earliest of male Hindi playback singers and was to be followed by Mohammad Rafi, Talat Mahmood, Hemanta Kumar, Mukesh, Kishore Kumar and Mahendra Kapoor. Manna Dey said, in India there were no female singers that could come close to Lata Mangeshkar and Asha Bhosle as far as versatility was concerned.
The good thing is that Lata and Asha sang, or are singing, for more years than any of the other great female singers, such as Geeta Dutt, Suman Kalyanpur, Shamshad Begum and Suraiya.
We also cannot forget Mehdi Hassan and Noor Jehan. My opinion is Mehdi Hassan is the greatest among the greats, though all these singers were so great that comparison of one to the other might seem inappropriate. No singer in the Indian Subcontinent could out-sing Mehdi Hassan in the genre of ghazal.
His rendition of movie songs was equally enchanting. How much those movies he sang for would live is a question, but his songs would continue to thrill generations to come.
All the aforementioned singers sang ghazals. Some of them even made quite a name, such as Talat Mahmood. But in this genre, after Mehdi Hassan, come the names of Jagjit Singh, Ghulam Ali, Anup Jalota and Pankaj Udhas.
It would be unfair if one does not mention Tagore singers such as Debabrata Biswas, Sagar Sen, Hemanta Mukhopadhay, Suchitra Mitra, Kanika Bondopadhayay and Rezwana Chowdhury Banya along with other great singers of the Indian Subcontinent.
When the Tagore lyrics are put to their patent music, the creation is an art that has no equal in the world. At least, I did not find any, nor did so many people with knowledge about eastern and western music that I have talked to.


The writer is a Bangladeshi
diplomat