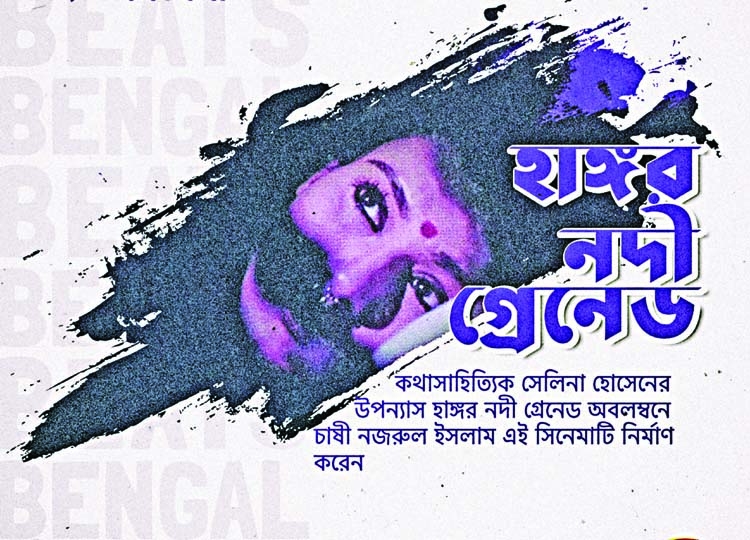 Faridul Ahasan Shourav
The film "Hangor Nodi Grenade" (1997), mainly influenced by the liberation war, was directed by a renowned filmmaker, Chashi Nazrul Islam. The story is based on the novel, containing the same name, "Hangor Nodi Grenade" written by Selina Hossain.
The film won Bangladesh National Film Award in three categories including the Best Director, the Best Story, and the Best Actress. It is agreed that this is one of the must-watch films of our archive in order to feel the spirit of our liberation war.
In 1972, Selina Hossain wrote this story, based on a true incident that occurred at Kaliganj in Jessore during the liberation war. Afterwards, it was published as a novel in the year of 1976. It should be mentioned that after the publication of its first edition; Satyajit Ray showed his interest to make a film on this novel.
The film, "Hangor Nodi Grenade" is basically a village centric story, where the name of the village was Haldigaon. Here an agile teenage girl, named "Buri" was married at an early age to Gafur, a widower of the same village. In his family, Gafur had two sons named Saleem and Kalim, left by his ex-wife. Buri was passing quality time with them. But due to the negative influence of the neighbours, an urge for motherhood emerged strongly in her. Beside Saleem and Kalim, this time she wanted a baby of their own, in her own womb.
To this continuation, Buri and Gafur went Kessha father's shrine with an expectation of a child, where most of the superstitious people from the village used to be seen also to vow. Shortly after their visit, Buri gave birth to their son, Rois. However, in place of being happy, to her utter surprise, she saw that her dream was shattered as her son was deaf and had trouble of impaired hearing. Since then, the story got a new turn and all over time, this new turn started questioning the humanitarian ground of the movie.
Although it is assumed that the visualization of the social status and the treatment of a handicapped person during the period of Liberation War was appropriate in the film, But in reality, Buri`s so-called idealistic behaviour in the reality of the Liberation War was quite questionable.
From the very beginning to the end, the dialogues, body movements and letting Rois in danger zone in the ending, were all against humanity. Some of the dialogues are quite offensive in terms of the reality of the social status and humanitarian ground of people with disabilities. For instance-
When Gafur asked his wife, "Why is our son born disabled?"
Buri replied, "I probably had a sin". That is, in her view, the birth of a child with disability is a result of sin. Gafur just wanted to ignore this superstition. But Buri repeatedly said with the reference of the village elders that they also considered the birth of a disabled child as the result of sin of the person.
Likewise in another scene portrays-
"Rois, you are my bone-wrenching kid. There is no happiness in my sadness for you. You are my youngest useless son ..." After saying this, the mother pushed the weeping boy into the ground. It was like this boy was born just to bear the negligence of his mother.
The story went through all those offensive dialogues after the birth of the handicapped boy. Eventually, Gafur fell ill and died one day. Gafur's tension was such that since their other two sons, Saleem and Kalim, would be solvent in the future and due to his disabilities, Rois won`t be as productive as his elder brothers. So his last wish to Buri was that she should take care of him for the rest of life. So again, the same attitude was evident in Gafur's thinking on screen.
After Gafur's death, Saleem was married to Ramiza. Their new baby was born the same year. At the time of the marriage of Kalim, the war of liberation started. The village, Holdigaon was also affected. Seeing the villagers uttering the slogan, Buri, from the pond bank scolded again saying, what do I do with you? You can't drive boat, you can't catch fish, you cannot do anything in the world."
Then another scene showed the woman saying to her son, "My son! You do not know that the village is in great danger now... won't you contribute anything for the country? Here, too, the part of the dialogue, "Won't you contribute anything for the country," shows that people with disabilities are the burden of the country.
Then Saleem went to war. For not informing about Saleem and the Mukti Bahini, Kalim was brutally murdered by the Pakistani Army and his associates (Traitor Bengali who liked to help Pak army) before the eyes of his mother, Buri. In this part of the story, we can sense the brutality of the liberation war. Although, one of the main reasons for the popularity of the movie, "Hangor Nodi Grenade" is the very last scene of the film.


The writer is an independent filmmaker
and film critic