Panahi's "Offside"- comedy about a tragedy 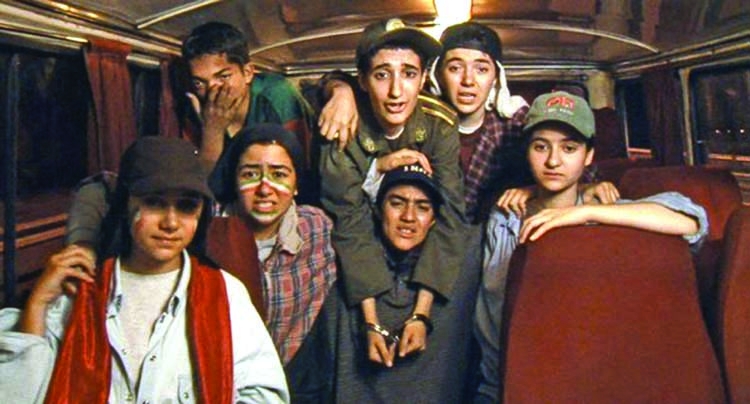 Faridul Ahasan Shourav
Offside is the story of teenage-girls who tried to sneak into Tehran's Azadi stadium to watch final world cup qualifying football match, where the Iran-Bahrain game is being played. On the surface, this could sound like it's about Football, but it's not. you do not even get to see quite some seconds of the match, and even that's poorly shown. To me- It's an indie-style of Football film that non-fans can even enjoy.
There are not any great actors, most of the characters within the film are not named, there is no soundtrack, most of the footage encompasses have a raw and almost documentary look to it. Though its dialogue is generally apolitical, Offside was banned by Iran's censors.
The movie starts with a middle-aged man sitting in the back of a taxi talking to its unseen driver, a signature moving vehicles shot of Iranian cinema. The person is a desperate father pursuing his young school-going daughter. At the same time in another bus full of boys and men, a girl has disguised herself as a male, her hat is pulled down and the national colours are painted on her face.
Because females are forbidden to go to stadium, only men are permitted to attend the sporting events. Although many girls dress like boys and sneak in. Stadium guards search everyone at the entrance to make sure no one carries fireworks and of course; no girl gets in. The girl tries to slide through security, but she is spotted and arrested.
She is put in a holding pen on the stadium roof with several other girls who have also been arrested; the pen is frustratingly near a window onto the game, but the girls are at the wrong angle to see it. Five other girls in various disguises are being held there who take on individual identities.
One is with feminist leanings. Another has played Football on a women's team. Another entrance disguised as a soldier then makes a silly mistake of sitting in an officer's seat. She's now handcuffed. The mostly rural soldiers yell at their prisoners and are not pleased with their assignment. They'd much rather be at home relaxing or taking care of their sheep.
In one of the most humorous scenes in the film, one amongst the girls has to go to the washroom. But since there are not any facilities for girls, the soldier must guard her while she goes in the men's toilet. The guard orders her not to look at the graffiti spray-painted on the toilet walls. "Can you read?
These are things too dirty for girls to read. Don't read!" Humanistic filmmaker Jafar Panahi is in the neo-realist tradition and, works with a largely unfamiliar cast, as usual, whom he handles with the skill of a Vittorio De Sica or a Ken Loach. Here he uses the sport of Football as a way to explore how the human rights of women in Iran are violated.
Meanwhile, he also explores how sport unites people. Before the game is over a minibus arrives to take them to the police squad. they're joined by a teenage boy who likes to explode firecrackers. In the closing scenes of this remarkable movie, the impatient and exhausted policemen, the angry and extremely tired girls, and the adolescent boy suddenly become one with each other and with all the fans in the streets.
Panahi isn't just presenting the response to Iran's victory in a game; he's showing us the thrill that can bring those in conflict together for a mystical moment of celebration.
Tehran explodes with jollity, and the bus becomes caught in a traffic jam as a spontaneous street party begins. Taking seven sparklers from the boy with the fireworks, the soldiers and the girls leave the bus and join the party, holding the sparklers above them. Finally, I would like to mention, I really don't know how and where do the Iranian directors get their inspiration in coming up with a plot like this.
The film is like two different worlds revolving at the same time, one connected to the other - the football match and the battle between sexes that's happening behind the walls of the stadium. For all of these reasons, Offside is a very enjoyable and humorous film by a very important director.


The writer is an Independent filmmaker
and film critic