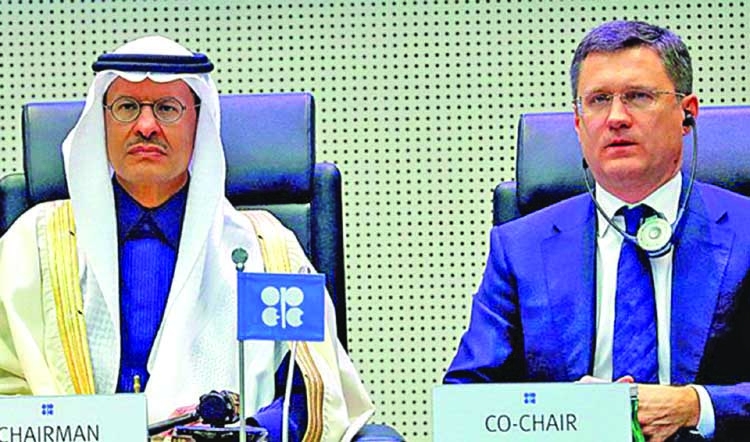 Will they meet? Saudi Arabian and Russian energy ministers Prince Abdulaziz bin Salman Al-Saud and Alexander Novak. -Reuters
Leaders of the global oil industry are planning a crucial "virtual" summit next Monday amid ongoing volatility in crude prices and falling energy demand.
The meeting follows a call from Saudi Arabia on Thursday for an urgent meeting and a round of telephone diplomacy last week involving the Kingdom, Russia and the US, as well as meetings between policymakers and oil industry executives.
The summit is expected to involve the 11 members of OPEC as well as other oil producers from the OPEC+ group. But exactly which countries will take part in the summit was still up in the air on Friday night, reports Arab News.
Russian President Vladimir Putin was holding talks with executives from the country's major oil companies before deciding whether or not to participate.
The Russian leader has previously indicated his willingness to get involved in talks to help resolve the crisis in the global energy industry, but Russia was also the country that refused to take part in a round of deeper production cuts proposed by Saudi Arabia in Vienna last month, sparking the current price war.
In response to that refusal, the Kingdom increased production and lowered its selling prices. On Sunday, Saudi Aramco, which has pushed output to a record 12.3 million barrels per day, is scheduled to announce its "official selling prices" (OSP) for the month of May, expected to show a continuation of the deep levels of discount to attract customers, especially in Asia, in the battle for global market share.
Brent crude continued its rollercoaster ride on global markets on Friday, dipping nearly 5 percent before hitting a high of 17.5 percent up at $34.91, before paring gains to about $33.
The options for the producers at Monday's meeting are limited, in the face of an unprecedented drop in global oil demand. By some estimates, more than 20 million barrels of daily demand was lost last month, the biggest ever contraction in oil history.
Saudi Arabia and Russia, which between them produce around 23 million barrels per day, are unlikely to be willing to take all the pain of bigger cuts without an offer from the Americans.
US President Donald Trump tweeted on Thursday that he expected between 10 million and 15 million barrels of oil to be taken out of supply, but he did not specify where this would come from. Meetings were expected to take place at the White House with oil industry executives and policymakers on Friday.
Daniel Yergin, Pulitzer Prize-winning oil expert, said: "The 'when,' 'how' and 'who' of the potential deal remain unclear. And the larger the universe of players the more difficult it will be to implement an agreement."OPEC+ consists of the 11 OPEC members, led by Saudi Arabia, plus 10 non-OPEC producers, of which Russia is by far the biggest.
The involvement of the US in the Monday meeting is also unclear. America is not an OPEC member, but US oil executives have attended OPEC deliberations in the past. American participation in any new rounds of output cuts will be constrained by the fact that the US oil industry is made up of private companies as opposed to state-directed corporations whose interests diverge.
While big players including Exxon Mobil and Chevron might be willing to take some advice from the White House, the smaller companies in the Texas shale fields are more focused on the immediate financial repercussions of the past month's volatility.