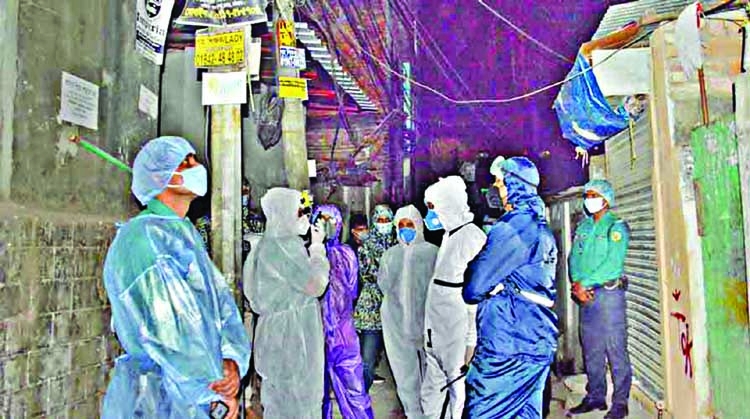 Chattogram District Administration locked down six families including the virus-infected patient's family. -AA
The daughter of the first known COVID-19 patient in Chattogram has been accused of hiding information about his illness after she and her mother-in-law returned from Saudi Arabia.
Now 19 people, including unsuspecting doctors and a policeman who came into close contact with the patient, have been quarantined. Several buildings of the patient's relatives have also been locked down.
His daughter's husband works in Saudi Arabia, from where the two women returned home on Mar 12 after performing Umrah. The mother-in-law went to her home in Satkania from the airport after a brief stay at the patient's home at the port city's Dampara.
Chawkbazar Police Station OC Nizam Uddin said on Saturday that a sub-inspector visited the house last Thursday after neighbors complained that the family were not following quarantine rules for overseas returnees and their close contacts, reports bdnews24.
"The Saudi returnee daughter of the infected person did not cooperate with us. She told police that her father had gone shopping. She also accused police of harassing the family even as the airport authorities cleared them," the OC said.
The patient took treatment at privately run National Hospital the same day, but the daughter hid the information, according to police. He was later admitted to the isolation ward of the Chattogram General Hospital and the result of the coronavirus test came out positive on Friday.
Police placed on lockdown the house and five other buildings in the neighbourhood. The house of the daughter's in-laws was also locked down.
On Saturday, four other buildings owned by the patient's relatives at Doublemooring and Dohazari were put on lockdown. "We could have acted earlier if they spoke the truth on Thursday," OC Nizam said.
Chattogram Civil Surgeon Sheikh Fazle Rabbi Mia said the police sub-inspector, three doctors of the hospital and 15 staff members were placed into quarantine.
The authorities have collected specimens from four members of the family for COVID-19 test, Fazle Rabbi said. The four exclude the two returnee women as their 14-day quarantine period was over, he added.