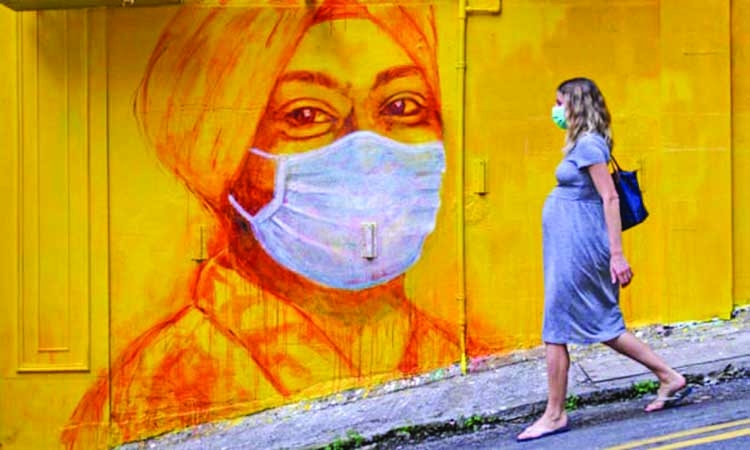 A pregnant woman wearing a face mask as a precautionary measure walks past a street mural in Hong Kong. -AFP
Liz Ford
Up to 9.5 million women and girls could miss out on vital family planning services this year because of Covid-19, potentially resulting in thousands of deaths.
Marie Stopes International warned on Friday that travel restrictions and lockdowns could have a devastating affect on women as they struggle to collect contraceptives and access other reproductive healthcare services, such as safe abortions, across the 37 countries in which it works.
MSI estimates that with an 80% reduction in service delivery for three months, and minimal services for the remainder of the year, 9.5 million people will miss out. If things were to return to normal after three months of disruption, the figure would drop to 4 million.
The organization predicts that the loss of services could result in as many as 3 million additional unintended pregnancies, 2.7 million unsafe abortions and 11,000 pregnancy-related deaths.
Last year, 32 million women used contraceptives provided by MSI, which is now calling on governments around the world to include reproductive healthcare on its list of essential services.
Marie Stopes UK said it was open for business as usual.
Simon Cooke, MSI's chief executive, said: "Women and girls will pay the price if governments do not act now to safeguard access to essential healthcare, including safe abortion and contraception."
In Nepal, the start of a national lockdown on 24 March immediately forced the closure of Marie Stopes clinics across the country. The government has now issued passes allowing health workers to travel to the clinics and some are beginning to reopen. Marie Stopes Nepal reported an increased number of calls from women wanting abortion services since the start of the lockdown.
In Sierra Leone, Felix Ikenna, a doctor and quality assurance director for MSI, pointed to the Ebola outbreak in 2014 as evidence of the importance of providing reproductive healthcare services.
Researchers found that the closure of clinics and reduced reproductive healthcare services led to between 3,600 and 4,900 additional maternal, neonatal and stillbirth deaths between 2014 and 2015, compared with 4,000 deaths from the Ebola virus itself during the entire epidemic.
"People will always need services, irrespective of an epidemic," said Ikenna. "During Ebola, the number of women we saw went up as word spread that we were still open.
"The crisis led to a spike in the number of teenage pregnancies. People were too afraid to go to hospital or government facilities. If we had stopped providing contraception and post-abortion care, it would have been much worse."
A briefing paper, published by the UN population fund last month, warned that the availability and distribution of contraceptives and other maternal health medicines were already being hampered by the pandemic. "This could have life-threatening consequences and reverse recent gains to ensure universal access to sexual and reproductive health," it said.