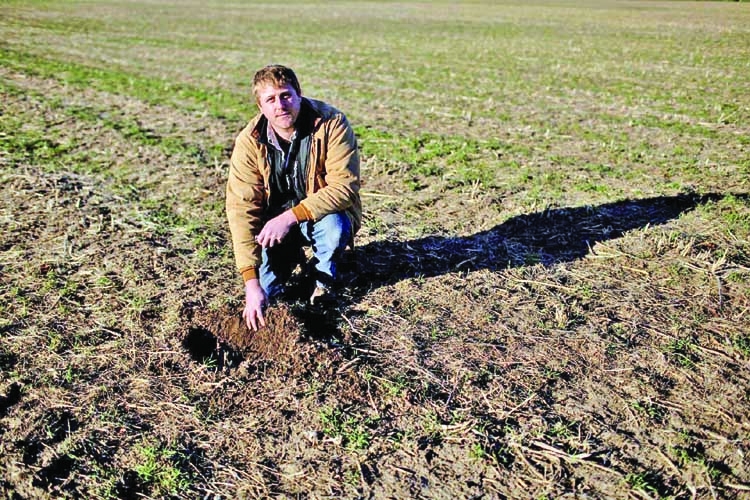 Watermelon and asparagus farmer Mike Chromczak, who is waiting for laborers to arrive and begin their mandatory quarantine against coronavirus disease (COVID-19), poses at Chromczak Farms in Brownsville, Ontario, Canada April 2, 2020. -Reuters
Mandatory coronavirus quarantines of seasonal foreign workers in Canada could hurt that country's fruit and vegetable output this year, and travel problems related to the pandemic could also leave US farmers with fewer workers than usual.
Foreign labor is critical to farm production in both countries, where domestic workers shun the hard physical labor and low pay. In Canada, where farms rely on 60,000 temporary foreign workers, their arrivals are delayed by initial border restrictions and grounded flights.
Once they arrive, the federal government requires them to be isolated for 14 days with pay, unable to work. In the United States, nearly 250,000 foreign guest workers, mostly from Mexico, help harvest fruit and vegetables each year. The State Department is processing H-2A visas for farm workers with reduced staffing, though some companies are still having a hard time getting workers in on time.
Ontario farmer Mike Chromczak said he was afraid he might be unable to harvest his asparagus crop next month unless his 28 Jamaican workers start arriving by mid-April.
"It would be well over 50% of our farm's revenue" lost, Chromczak said. "But I see it as a much bigger issue than me. This is a matter of food security for our country." Steve Bamford's 35 Caribbean workers are just starting to trickle in to his Ontario apple orchards. Then they are isolated and paid for 40 hours per week during that period without touching a tree. Pruning work, a critical step to maximize yields, is now overdue.
"It's an extreme cost. You don't plan on bringing people in and not work for two weeks," Bamford said.Some Canadian farmers expect to reap smaller fruit and vegetable harvests this year if foreign labor is not available soon, said Scott Ross, director of farm policy at the Canadian Federation of Agriculture.
In the United States, "delays are potentially very hazardous to farmers who were counting on that workforce to show up at an exact period of time to harvest a perishable crop," said Dave Puglia, CEO of Western Growers Association, which represents fruit and vegetable companies in states like California and Arizona.
He said workers in the United States do not have to wait 14 days before they start working, although more efforts are being made to space workers out on the farms.
Dannia Sanchez, president of D & J and Sons Harvesting in Florida, is awaiting approval to bring in some 200 temporary agriculture workers, while blueberries in Florida ripen and Michigan asparagus nears harvest.
Abad Hernandez Cruz, a Mexican farmworker harvesting onions in Georgia, said he is working 12 or more hours a day.
"A lot of people are missing," he said, referring to farmworkers whose visas weren't approved after the United States scaled back some consular activities in response to coronavirus."If the farm doesn't produce, the city doesn't eat."