All firms to get 75% wage subsidy for local employees 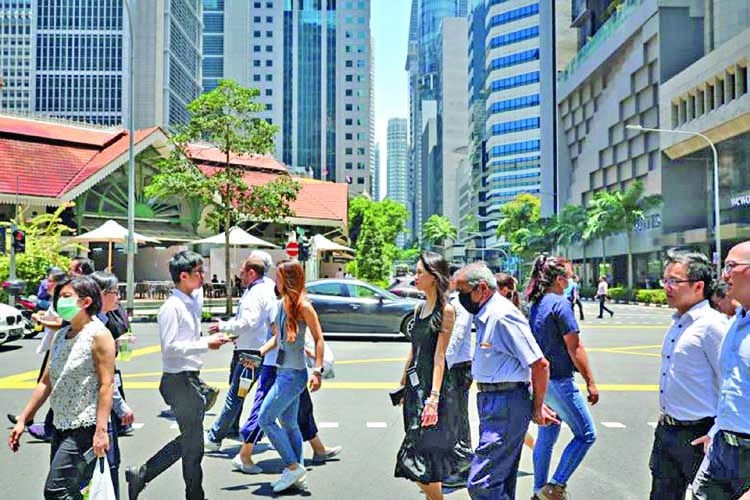 The higher support for April is temporary, and the scheme will revert to normal levels beyond that. -File Photo
Firms in all sectors will have 75 per cent of their local employees' wages subsidised for the month of April, said Deputy Prime Minister HengSweeKeat on Monday (April 6).
They will also receive the first payout under the enhanced Jobs Support Scheme (JSS) this month, instead of next month, to help with cash flow, he told Parliament in announcing a third set of measures to save businesses and jobs from the fallout of the coronavirus pandemic.
The wage subsidy applies to the first $4,600 of wages paid this month for each of the more than 1.9 million Singaporean and permanent resident employees.
The scheme - first announced during the Budget in February - was enhanced in the Supplementary Budget in March to provide a subsidy of 25 per cent of the wages of all local employees, with higher subsidies of 50 per cent for those in food services and 75 per cent for those in tourism and aviation.
The payouts were to be in three tranches in May, July and October, with the monthly wage cap raised from $3,600 to $4,600. The higher support for April is temporary, and the scheme will revert to normal levels beyond that.
"The aim of this strong support is to directly reduce firms' wage costs, to help them retain their workers. I expect firms to make use of this Jobs Support Scheme to continue paying your workers and refrain from putting workers on no-pay leave during this period, or worse, retrenching them," said DPM Heng. By signing up, you agree to our Privacy Policy and Terms and Conditions.
"We will monitor the situation carefully together with our tripartite partners, and take action where needed."
The enhanced scheme was among additional measures he announced to help Singapore cope with the circuit breaker to stem the spread of Covid-19, which he termed the Solidarity Budget.
MrHeng noted that many firms cannot operate at all, or can only operate at a much reduced level in the coming weeks due to the strict "circuit breaker" measures announced by Prime Minister Lee HsienLoong last Friday.
Most workplaces, apart from those providing essential services or in key economic sectors, will be closed for about a month from Tuesday in order to break the chain of transmission of Covid-19.
But firms should still retain and pay their workers, stressed MrHeng.
This will also enable them to resume operations quickly when the circuit breaker is lifted, he said.
The additional subsidy from the temporary enhancement will first be calculated based on wages paid in October 2019, and later adjusted based on wages paid in April 2020.
This means that employers which do not pay their staff wages this month will not benefit from the temporary enhancement to the payout.
MrHeng clarified that the salary ceiling, which is based on the median wage level of full-time employed residents, does not mean that workers earning beyond that amount do not qualify.
It means that regardless of how much they earn, the maximum subsidy for their pay will be 75 per cent of $4,600, which is $3,450.
Firms on Giro and PayNow will start receiving the first payout next week, while those which are not will receive their payouts by cheque, starting about a week later.
To further ease labor costs during these four weeks, employers will receive a foreign worker levy rebate of $750 for each work permit or S Pass holder, based on previous levies paid in 2020, said MrHeng.
This will be paid out as early as April 21, and is to help them pay and take care of the upkeep of their workers, and prepare their workforce to restart when the circuit breaker is lifted, he added.
"Many employers also hire foreign workers on work permits and S Passes. In the same spirit, employers should take care of these workers who will also face difficulties during this circuit breaker period."
He also said that the foreign worker levy due in April will be waived, which he first announced in a Facebook post last Saturday.
"The Government recognizes that firms have been paying foreign worker levies in normal times. So in these exceptional times, we are temporarily redirecting resources back to the firms, to enable them to provide support for their foreign workers," said MrHeng.
Manpower Minister Josephine Teo will provide more details, he added.