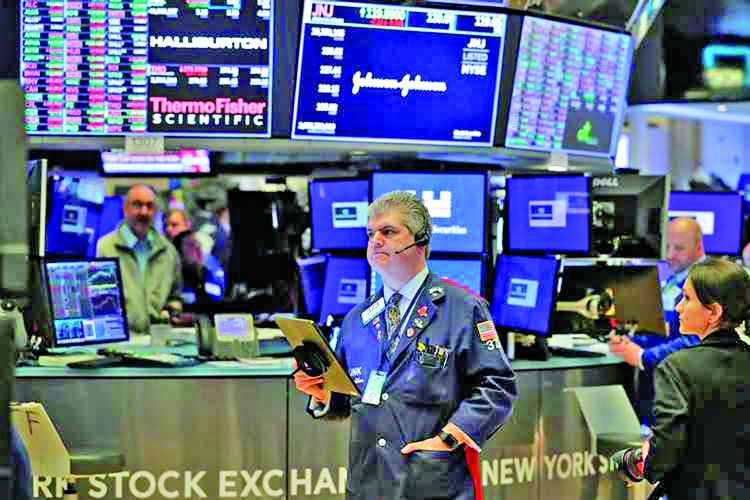 Traders work on the floor of the New York Stock Exchange (NYSE) as the building prepares to close indefinitely due to the coronavirus disease (COVID-19) outbreak in New York, US, March 20, 2020. -Reuters
Oil prices fell on Monday after Saudi Arabia and Russia delayed a meeting to discuss output cuts that could help to reduce global oversupply as the coronavirus pandemic pummels demand.
Brent crude LCoc1 fell more than $3 when Asian markets opened but recovered some ground, with traders hopeful a deal between the top producers was still within reach.
At 1135 GMT, Brent was down 81 cents, or 2.4%, at $33.30 a barrel. US crude CLc1 was 65 cents, or 2.3%, lower at $27.69 a barrel, off a session low of $25.28. The Organization of the Petroleum Exporting Countries and its allies, a group known as OPEC+, are expected to meet on Thursday, instead of Monday, to discuss cutting production.
"Perhaps it is best that the meeting was delayed for producers to cement a minimum of common ground before the actual discussions take place on Thursday," BNP Paribas analyst Harry Tchilinguirian said. He noted initial disappointment at the delay had driven down prices in Asian business.
Kremlin spokesman Dmitry Peskov said Moscow was ready to coordinate with other oil exporting countries to help stabilise the market and that the OPEC+ meeting was delayed for technical reasons. OPEC+ is working on a deal to cut production by about 10% of world supply, or 10 million barrels per day (bpd), in what member states expect to be an unprecedented global effort.
But Rystad Energy's head of oil markets BjornarTonhaugen said even if the group agrees to cut up to 15 million bpd, "it will only be enough to scratch the surface of the more than 23 million bpd supply overhang predicted for April 2020".
Sentiment was lifted by Saudi Arabia's decision to delay releasing its official crude selling prices to Friday, pending the outcome of the OPEC+ meeting. US President Donald Trump has said he would impose tariffs on crude imports if needed to protect US energy workers from the oil price crash.
Investor morale in the euro zone fell to an all-time low in April and the bloc's economy is in deep recession because of the novel coronavirus, a survey showed on Monday.
"Wherever you look, the narrative is the same: the global economy is in a painful recession," Stephen Brennock of oil broker PVM said. "As OPEC+ ponders fresh supply curbs, you can't help but think that the oil market will continue to be at the mercy of the virus pandemic."Markets were also spooked when the National Health Commission of China said on Monday that 78 new asymptomatic cases had been identified as of the end of the day on Sunday, compared with 47 the day before.
Asymptomatic patients, who show no symptoms but can still pass the virus to others, have become China's chief concern after strict containment measures succeeded in cutting the overall infection rate.
---Reuters, London