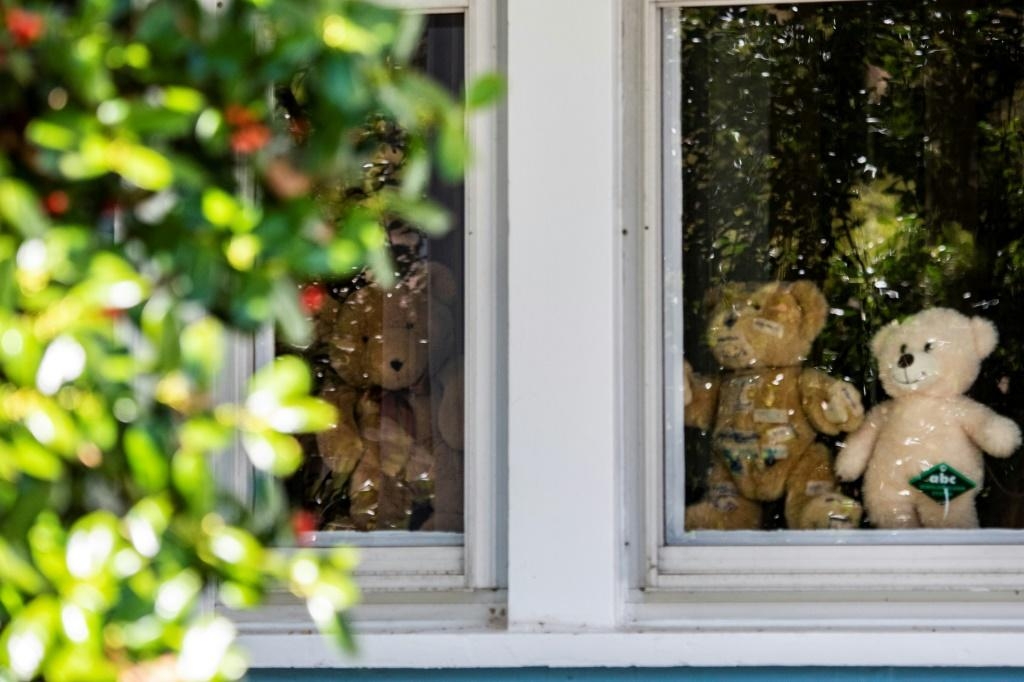 In a residential neighborhood of the US capital, children are hunting for bears. Not the ferocious ones, of course – but stuffed animals peering out from neighbors’ windows.
In Washington as in other cities and towns across America and around the world, the collective scavenger hunt is captivating stir-crazy children under coronavirus lockdowns.
With schools closed and the vast majority of Americans ordered to stay at home, a rare walk is often the only fresh air families are getting. And the bear hunt is making it more fun.
“It is hard for parents to come up with stuff for the kids to do,” said Rachel, 32, who was out hunting teddy bears with her eight-month old daughter in the Chevy Chase area.
The stuffed toys started appearing in windows around the neighborhood about two weeks ago.
The community email network Nextdoor even has maps showing parents and children where to look.
Joyful kids dart from one house to the next, happy to spot one, two, three or even four bears at the same house.
“When I saw it on the listserv, I decided to participate immediately,” says Rachel, who asked not to be identified by her last name.
The idea for the scavenger hunts came from the perennially popular 1989 children’s book We’re Going On A Bear Hunt, by British author Michael Rosen.
Teddy bears have popped up in windows in Britain, the Netherlands and as far away as New Zealand, where Prime Minister Jacinda Ardern put one in the window of her family home in Wellington, local media reported.
In Washington, at one home in Chevy Chase, the owners posted a sign congratulating the young hunters: “You’ve found one!”
One of the earnest children, eight-year-old Joshua found a giant teddy bear sitting in an armchair on the porch of one home.
“That’s one over there is huge!” he exclaimed with glee.
Joshua and his little brother spent nearly two hours combing the neighborhood for cuddly bears – and walked a fair distance.
“It’s really fun to have something to look for,” Joshua says. “We didn’t even notice how long we were out, or how far we walked!”
At the end of the family stroll, the kids have lost count of the bears and other stuffed toys they’ve seen.
“It gives the children an activity, and the parents an activity to do outside, and something that’s reasonably safe for them,” said Washington resident Phillip Renfrow.
“That’s important.”
Renfrow is a 72-year-old architect living in the US capital’s Cleveland Park neighborhood. He said participating in the hunt was also fun for those putting bears on display.
He said he recently spotted a man and his young daughter, aged about seven, on the hunt near his home.
“She was walking with her little toy binoculars up to the houses, so she spotted ours and focused on it for a few seconds,” Renfrow said.
These moments of human contact really count at a time when the global pandemic has already killed more than 70,000 people around the world, said Christopher Drell, a massage therapist.
His wife Rachel, who is a real estate agent, also said she was seeking some levity in these grim times.
The bears at her house “are wearing my mother-in-law’s very favorite hat in the entire world and a scarf from the dog and they are out for a picnic,” she told AFP.
And in a wink at the times, the bears are observing social distancing guidelines. -- AFP