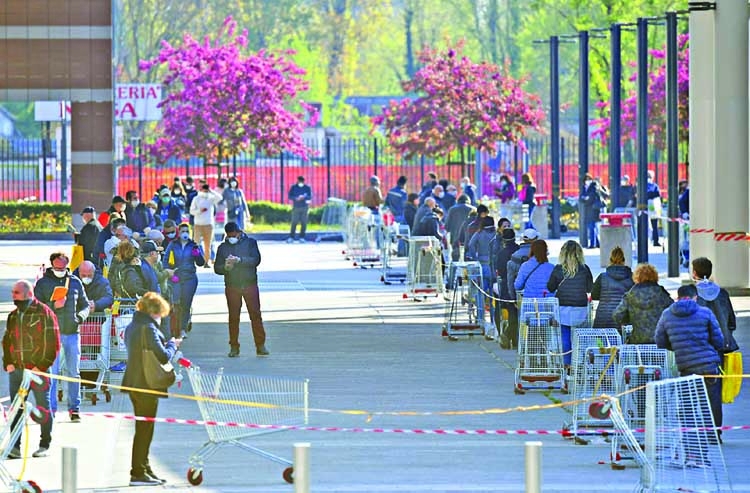 People queue in line outside a supermarket, as the spread of the coronavirus disease (COVID-19) continues, in Milan, Italy on Monday. Italy unveiled a record 400 billion euro ($430 billion) stimulus to help businesses hurt by a month-long national lockdow
Italy on Monday unveiled a record 400 billion euro ($430 billion) stimulus to help businesses hurt by a month-long national lockdown that is like to run on for many more weeks.
Prime Minister Giuseppe Conte told the nation to be patient in the face of a pandemic that has now officially claimed 16,523 lives in the Mediterranean country and left millions at least temporarily unemployed "We will soon see a new spring for Italy but for the moment we must stay at home," the Italian leader said in a television address. The program will add to the 340 billion euros in government-backed loans announced last month. Conte said it represented "the most powerful intervention in the country's history".
Half of the new package will be earmarked for export-oriented companies whose turnover has imploded over the past month. Italy's health "emergency is also an economic and social one," Conte said. The government also announced that it will take steps to protect Italian companies weakened by the economic crisis from being taken over by foreign competitors.
"This moment of difficult will not translate into an opportunity to prey on Italian companies," cabinet undersecretary Riccardo Fraccaro said.
---AFP