The advent of coronavirus has dealt a heavy blow to almost all the activities of showbiz sector of all the nations. The Covid-19 pandemic has forced all the stars as well as activists of entertainment sector into home quarantine as the whole world passes through a terrible uncertainty. No one knows when it will end.
Like everywhere across the globe, various lockdown measures have been imposed in Bangladesh as well, putting almost all the activities of showbiz sector to a halt. Currently cinema halls are closed and shooting of films and dramas has stopped. At the same time, the stage shows of the country's artistes have also stopped. In a word, the showbiz in coronavirus period has suffered a massive collapse.
This time on PahelaBaishakh, the TV channels could not broadcast new dramas. In the meantime, many channels including BTV have started airing old dramas.
It is learned that the airing of the current dramas has also stopped. And a few days later the holy Eid-ul-Fitr is to be celebrated.
The channel authorities said that new dramas will not be seen on the channels even on Eid. With a small number of dramas that ended shooting before the lockdown, this time the TV channels will organize Eid on a small range.  More than 600 dramas have been made for TV channels and YouTube channels for the previous Eid. Many commented that this time the number would be less than a hundred.
AhsanHabibNasim, general secretary of the actors' association, said that the lockdown is causing a loss of Tk 1.5 crore every day on the drama scene.
"It can be said that this is a very big loss for us. Artistes are under home quarantine on both PahelaBoishakh and Eid. It is unknown at this time when this situation will blow past us.  Many artistes and performers are also facing economic problems", he said.
Meanwhile, movies are in a worse situation than TV dramas. Due to this lockdown all the cinema halls of the country are closed. As a result, there is no release of new pictures.
The release of films for the coming Eid is absolutely uncertain. The disaster in the film scene created by the coronavirus will not be so easily averted say that the film connoisseurs.
They commented that even if the cinema halls are opened, the spectators will not come to the cinema hall in fear of Coronavirus.
Zayed Khan, general secretary of the artistes' association, said, "Honestly, our film is going through a bad time. In the meantime, the current situation has put us in even more crisis. If we don't get incentives from the government, it will be difficult for us to overcome this disaster."
Music is one of the mediums of showbiz. The musicians have been under home quarantine for the last two months. There are no stage shows in the country or abroad. In addition to the stage shows of the artistes, the corona virus has affected the audio arena.
It goes without saying that there is no rush of artistes-lyricists, composers and production companies to release new songs on the coming Eid. As a result, the number of new songs released thisEid is also staggeringly low.
Some songs made before the lockdown will be released on Eid. Audio producers comment that people do not have the mentality to listen to music at this time.
According to showbiz people, this effect of corona virus has had a serious impact on showbiz like other sectors. Although the government is giving incentives in various sectors at this time. However, there aren't such news in the showbiz sector.
It is the government's encouragement that can help the situation be averted for the entertainment industry. 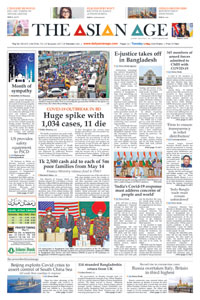