2 journos among 3 sued under Digital Security Act in Meherpur 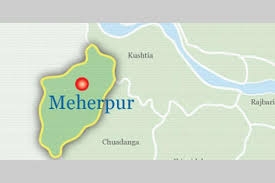 A case has been filed against three people, including the editor of a local daily newspaper and its joint editor, under the Digital Security Act.
Sabuj Hossain, nephew of the former MP Makbul Hossain of Gangni-2 constituency, filed the case at Gangni Police Station on Wednesday night, said Obaidur Rahman, officer-in-charge of the police station.
Yeadul Momin, editor of ‘Daily Meherpur’ and also the district correspondent of ‘Kaler Kantho’, its joint editor Al Amin and publisher ASM Emon were among the accused.
According to case statement, a report titled ‘house occupied by MP Makbul for 26 years’ on the daily newspaper ‘Daily Meherpur’was published on May 11.
Contacted, the Editor and joint editor said the case was filed against them with the aim of harassing them and in a bid to scare the media people.