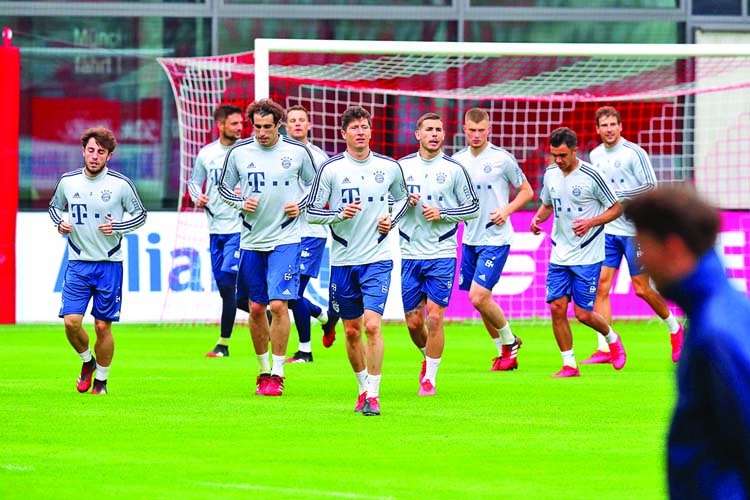 Bayern Munich players seen at a training session on Thursday. -Twitter
Borussia Dortmund host Schalke 04 in Germany's fiercest derby on Saturday but no more than 300 people will be in and around the 80,000 capacity arena due to COVID-19 restrictions as the Bundesliga gets back to business after a two-month break. The Bundesliga is the first major sports league to resume since world sport was brought to a standstill by the pandemic, and players will have to abide by a strict set of health guidelines aimed minimizing the risk of infection.
Fans will not be able to attend the matches as part of the safety regulations, leaving it up to the players to provide the spark for what are being called "ghost" games. "It will most certainly be the most unusual derby in history," Dortmund's head of pro players Sebastian Kehl said this week. "This game lives off fans, their emotions, the intensity of the stadium. We will not experience any of that. The players will be badly missing the motivation from the atmosphere and the fans," he told Welt newspaper.
Whatever the conditions, Dortmund will look to pick up where they left off before the break and earn a victory over their fierce rivals that would keep them in the title hunt. With nine matches left, Dortmund are on 51 points, four behind leaders Bayern Munich and one ahead of RB Leipzig. Dortmund have always relied on their 80,000 sold-out crowd to push them forward at every home game but on Saturday only about 200 people will be allowed pitchside and in the stands, with another 100, mainly security staff, posted outside the arena.
With Europe's biggest standing tribune, the Yellow Wall, empty on Saturday the hosts have staged several training sessions at the arena to get used to playing without fans. During Wednesday's training session music that is played prior to matches blared from the speakers as the team simulated Saturday's conditions.
On paper the hosts are favourites, having won seven of their last eight games. Since January, Erling Haaland and Jadon Sancho have scored nine goals together, more than double that of the entire Schalke team (four). But Dortmund will be missing injured captain Marco Reus and defender Dan-Axel Zagadou while midfielders Axel Witsel and Emre Can are also doubtful. Schalke are without a win in their last seven league games, the longest winless stretch under coach David Wagner, and have scored just two goals in the process.
After a strong start to the season they have dropped to sixth on 37 points and are in danger of missing out on Europe next season. Champions Bayern, chasing a record-extending eighth straight title, travel to Union Berlin on Sunday with the hosts likely to be without coach Urs Fischer, who on Wednesday left the team's mandatory seven-day isolation camp ahead of the season restart.
Leipzig, on 50 points, host Freiburg while Borussia Moenchengladbach, a further point behind in fourth place, travel to Eintracht Frankfurt.
---Reuters