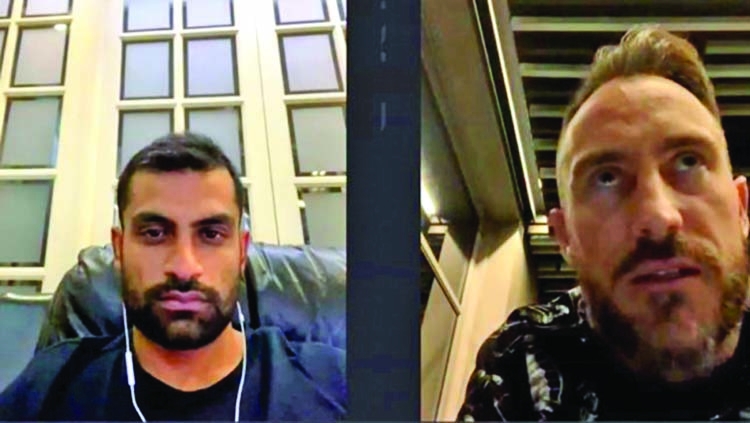 Former South Africa captain Faf du Plessis and Tamim Iqbal chatting during a Facebook Live showon Wednesday night. -Collected
Former South Africa captain Faf du Plessis said he is interested to play in Bangladesh's franchise basedprestigious T20 league- Bangladesh Premier League (BPL). Faf shared his interest during a Facebook Live show with Tamim Iqbal on Wednesday night.
"Obviously I am interested to take part in BPL. But I don't think this is the right platform to talk about that (laugh)!" Faf said during the show after Tamim asked him about his thoughts on playing in the league.
In the light-hearted Facebook Live session, Tamim told Faf that he would like to have him in BPL and in his team.
He said that Bangladesh was consistent enough in the 2019 World Cup even though they finished as low as eighth position in the 10-team tournament. Bangladesh won three matches including the 21-run win over South Africa inthe opening game. Whereas they were bundled out for 78 runs against South
Africa in 2011 World Cup and that too at their home den. Faf Du Plessis, played his first match against Bangladesh in 2011 World Cup indeed. He was very happy to see Bangladesh's upsurge in global cricket.
"Your performance in the World Cup was tremendous. I didn't expect it from you. I thought it would be 'cold and hot' and there will be a game where you will fight. But Bangladesh was the most consistent team. At the same time, you batted so well that we didn't have any answer against you in the first match," Du Plessis said. "There was a time when Bangladesh team used to rely on one or two performers. But now you have many players who can change the game at any time." He added.
He also said a two-week quarantine period before and after the ICC T20 World Cup could be made mandatory so that the tournament can be conducted in the scheduled window of October-November, report agency.
Du Plessis made the suggestion during a Facebook live chat with Bangladesh opener Tamim Iqbal where he also expressed wishes to play in the Bangladesh Premier League once the cricket resumes.
This edition of the T20 World Cup is scheduled during the October-November window but suggestions and doubts are galore about staging the tournament because of the Coronavirus outbreak.
"I am not sure... reading that travelling is going to be an issue for lots of countries and they are talking about December or January. But even if Australia is not affected like other countries, to get people from Bangladesh, South Africa or India where there is more danger, obviously it's a health risk to them," du Plessis said. "But you can go in before the tournament (for) two weeks isolation and then play the tournament and afterwards two weeks isolation. But I don't know when South Africa will open their travel ban because we can't go there like old days on boats."
Australian opener David Warner too had expressed doubts about the T20 World Cup going as per schedule. "The ICC World Cup will not go ahead here by the looks of it. It will be difficult to get everyone (16 teams) together," he told Rohit Sharma during an Instagram live chat.