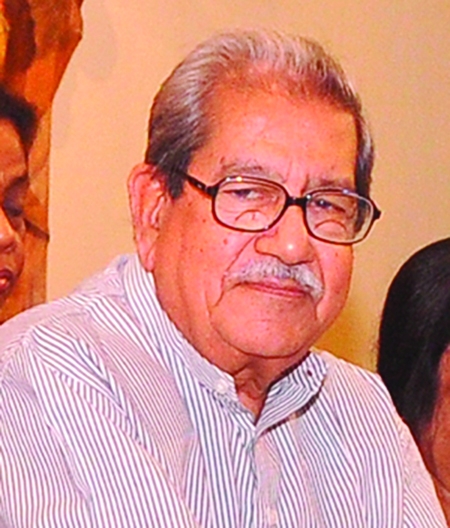 National Professor and legendary educationist Dr Anisuzzaman passed away on Thursday. He breathed his last at 4:55pm at Combined Military Hospital in the city. He was 83.
Professor Anisuzzaman was tested coronavirus positive, his son Ananda Zaman confirmed it and said, ''The doctors at CMH carried out coronavirus test collecting samples from the body and the result was positive.''
This noted educationist was also suffering from other complications including heart ailments.
Ananda said his father has been suffering from respiratory problems, kidney and lung ailments, parkinson's disease and prostate complications.
"The body will be handed over in the morning Friday (today). We will take decisions about Janaza and burial then," Ananda Zaman said. Family members rushed him to Universal Medical College Hospital after he fell seriously sick on April 27 from where he was shifted to the CMH on May 9 as doctors see no improvement in his condition. Prof Anisuzzamanwas previously hospitalised for one week in the beginning of April.
Prof Anisuzzaman played a significant role by actively participating in all democratic movements of the Bengali nation. A valiant freedom fighter for the country's Liberation War 1971, Prof Anisuzzaman had also taken part in the Language Movement (1952), participated in the Mass Uprising (1969) and the anti-autocracy movement (1990). In 2015, he had received death threats from Islamic fanatics for his outspoken role in establishing a society with religious harmony, co-existence, cosmopolitan Bengali culture and peace.
Mourning his death, President Abdul Hamid and Prime Minister Sheikh Hasina expressed deep shock and sorrow and offered prayers for salvation to the departed soul.
PM Sheikh Hasina recalled with deep respect the outstanding contributions of Prof Anisuzzaman in the field of education. "I was a student of Sir's tutorial group. His death is an irreparable loss to the country," said Sheikh Hasina in a condolence message.
The PM also prayed for eternal peace of the departed soul and profound condolence to the bereaved family.
One of the leading intellectuals of the country, Prof Anisuzzaman during and beyond his teacherhood at the University of Dhaka and University of Chittagong has always guided and supported his students and visitors with best ideas. A man of true integrity, he worked lifelong for betterment of the society and the nation.
Ministers, hundreds of his pupils and people from different walks too mourned to his death.
Prof Anisuzzaman survived by two daughters, a son and his wife.
EARLY LIFE AND EDUCATION
Prof Anisuzzaman was born on February 18 in 1937 at Bashirhat village under 24 Pargana district of West Bengal of the then undivided India. Along with his family, he moved to Khulna after the 1947 partition. After about a year, they again moved to Dhaka. His father, ATM Moazzem was a homeopathy practitioner and his grandfather, Sheikh Abdur Rahim was a journalist and writer.
He completed his HSC from Jagannath College, obtained bachelor degree in 1956 and master's in 1957 in Bengali literature from the University of Dhaka. He completed his Ph.D. in 1962 at the age of 25 from the same university. He was a post-doctoral fellow at the University of Chicago (1964-65) and a Commonwealth Academic Staff fellow at the University of London (1974-75).
CAREER
Anisuzzaman served as a faculty member at the University of Dhaka during 1959-69, 1985-2003 and 2005-08. At the university, he worked with noted linguistic expert Dr Muhammad Shahidullah and Prof Muhammad Abdul Hye and Prof Munier Chowdhury.
He also taught Bengali at the University of Chittagong during 1969-85. From 1978 to 1983, he was associated with research projects of the United Nations University. He was a visiting fellow at the University of Paris (1994), North Carolina State University (1995) and University of Calcutta (2010), and a visiting professor at the Visva-Bharati (2008-09, 2011).
Prof Anisuzzaman was elevated to professor emeritus at the University of Dhaka for his outstanding contribution in teaching Bengali literature towards a progressive transformation of the society for generations.
Apart from preaching out theories in the classroom, he was also a soul-searching researcher of Bengali culture, language and literature. His incredible research into the reflection of the Muslim mind in 19th century Bengali literature and into pre-19th century Bengali era were groundbreaking.
OTHER CONTRIBUTIONS
He was a member of the Planning Commission of Bangladesh during the Liberation War and a member of the National Education Commission set up by the government after independence. He was a pivotal figure in translating the Constitution of Bangladesh in Bangla in 1972. He also served as chairman of the Trustee Board of the Nazrul Institute and also was the president of Bangla Academy from 2012 till the last day of his life.
For the trial of war criminals, he appeared as a witness before the International Crimes Tribunal. He remained a champion for the cause of secularism.
PUBLICATIONS
His publications include Muslim-manas O Bangla Sahitya, Swaruper Sandhane, Purono Bangla Gadya, Amar Ekattor, Bangali Nari: Sahitye O Samaje, Kal Nirabadhi, Ihajagatikata O Anyanya, Bipula Prithibi; Factory Correspondence and other Bengali Documents in the India Office Library and Records; Creativity, Reality and Identity; Cultural Pluralism and Identity, Religion and Recent History. His first piece of writing, a story, was published in Nowbahar, a literary magazine, in 1950.
AWARDS AND ACHIEVEMENTS
Prof Anisuzzaman was awarded Ekushey Padak and Swadhinata Padak, the highest state awards given by the government of Bangladesh, for his outstanding contribution to education.
The Indian government had awarded him Padma Bhusan, the country's third highest civilian honor, for his distinguished service in fields of Bangla literature and education.