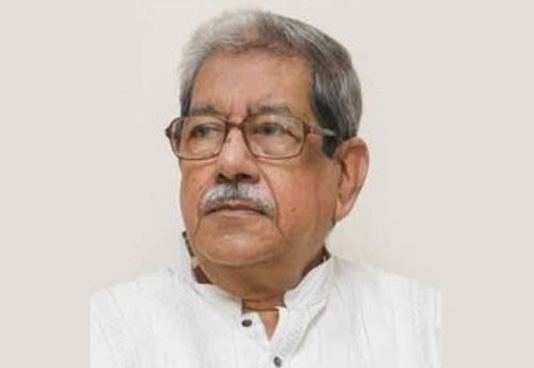 Eminent educationist and National Professor Dr Anisuzzaman was laid to his eternal rest with state honour at the Azimpur graveyard here a day after he breathed his last at Dhaka’s Combined Military Hospital (CMH).
A contingent of policemen offered him the honour guard as the body was laid on the grave of his father and beside his mother at the graveyard at 10.23 am after a namaj-e-janaza and other Islamic burial rituals were performed at the scene.
Anisuzzaman breathed his last at around 4:55 pm on Thursday at the CMH, Dhaka where he was being treated since May 10 for old age complications and following his death he was tested COVID-19 positive.
The detection of the COVID-19 case forced amendment to an initial plan for staging janazas at the Dhaka University campus and Bangla Academy while the burial plan was reset in line with a Prime Minister’s Office directive.
Anisuzzaman’s son Ananda Zaman in a statement said the detection of the virus unfortunately prevented most of those who wanted to join the janaza and have their last glimpses of the celebrated national professor.
“(But) Whether you can attend or not, please pray (for him) from distance,” he wrote in a message detailing the amended burial plan under which a team of voluntary Markazul Islam went to the CMH mortuary in the morning where they performed the rituals and religious practices ahead of putting it in a coffin.
Then the body was driven to the Azimpur graveyard for burial amid the brief state ceremony and religious fervor.
People from all walks of life paid through social media tributes and respect to Anizuzzaman, widely regarded as a guardian angel, as the prevailing shutdown prevented many from attending the janaza.
President M Abdul Hamid and Prime Minister Sheikh Hasina issued separate statements expressing their profound shock and sorrow immediately after his demise and praying for eternal peace of the departed soul.
They also conveyed deep sympathy to the bereaved family members as he left behind his wife, a son and two daughters alongside numerous admirers and students with the incumbent premier being one of the most prominent ones.
Family sources earlier said Anisuzzaman was first admitted to private Universal Cardiac Hospital in the city on April 29 with various health complications and was later shifted to the intensive care unit of the facility on May 2 ahead of his transfer to the CMH.
A leading member of the country’s civil society, prolific writer and professor emeritus of the Bangla Department of premier Dhaka University, Anisuzzaman was a prominent 1952 Language Movement veteran and leading figure of the intelligentsia who backed the 1969 mass upsurge.
But he is more widely remembered for his role in the country’s 1971 Liberation War when he provided his crucial intellectual services to the government in exile, put in his efforts to draw global supports for the Bengalis cause, particularly mobilizing the global intelligentsia.
Anisuzzaman was a member of the Liberation War time government’s Planning Commission and member of the National Education Commission set up by the post-independence Bangabandhu government.
Anisuzzaman visibly lived an active life even during his last days while he served as Bangla Academy’s president and elected Fellow of the Asiatic Society of Bangladesh.
He was honoured with the position of a national professor for his outstanding role during his protracted academic career.
Anisuzzaman was a post-doctoral fellow at the University of Chicago (1964-65), a Commonwealth Academic Staff Fellow at the University of London (1974-75), and was associated with research projects of the United Nations University (1978-83).
Having taught Bengali literature at the Universities of Dhaka (1959-69, 1985-2003 and 2005-08) and Chittagong (1969-85), he was a Professor Emeritus at the University of Dhaka until his demise.
Anisuzzaman kept mark of his academic excellence in abroad as well while from 1978 to 1983 was associated with research projects of the United Nations University.
He was a visiting fellow at the University of Paris (1994), North Carolina State University (1995) and University of Calcutta (2010), and a visiting professor at the Visva-Bharati (2008-09 and 2011).
The books he authored included “Kaal Nirobodhi” (2003), “Factory correspondence and other Bengali Documents in the India office Library and Records” (1981), “Creativity, Identity and Reality” (1991), “Cultural Pluralism” (1993) and “Identity, Religion and Recent history” (1995), “Aamar Ekattor” (1997), “Muktijudho Ebong Tarpor” (1998), “Aamar Chokh” (1999), “Bangali Nari : Sahittye o Somaje” (2000).
The other books related to his academic studies as a professor of Bangla literature included “Muslim Manos O Bangla Sahitya” (1964), “Munir Chowdhury” (1975), “Swaruper Sandhane” (1976), “Atharo Sotoker Bangla Cithi” (1983), “Purono Bangla Gadya” (1984).
He was conferred with the Bangla Academy award in 1970 for conducting outstanding research while was awarded the Ekushe Padak, an award given by the State, for his contribution to education in 1983.
The Rabindra Bharati conferred on him an honorary D.Lit in 2005 and the University of Calcutta the Sarojini Basu Medal in 2008.