US blames IS for Kabul maternity attack, urges peace process 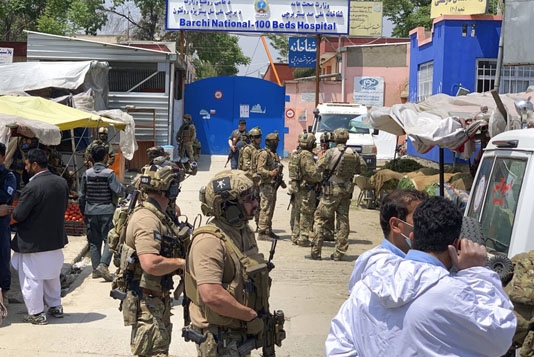 The US negotiator on Afghanistan blamed the Islamic State group Thursday for the shocking attack on a maternity hospital as he urged the government and Taliban to stick to a faltering peace process.
Zalmay Khalilzad said the US government had assessed that the Islamic State in Khorasan, the Afghan branch of the extremists, carried out Tuesday’s dual attacks on the Kabul hospital and on a funeral in eastern Afghanistan.
The Islamic State group “opposes a peace agreement between the Islamic Republic of Afghanistan and the Taliban, and seeks to encourage sectarian war as in Iraq and Syria,” Khalilzad wrote on Twitter.
“Rather than falling into the ISIS trap and delay peace or create obstacles, Afghans must come together to crush this menace and pursue a historic peace opportunity,” he wrote.
“No more excuses. Afghans, and the world, deserve better.”
The Islamic State group claimed responsibility for the funeral bombing, which killed 32 mourners.
But no group has taken credit for the assault on the maternity hospital where at least 24 people including newborns, mothers and nurses were killed.
Secretary of State Mike Pompeo earlier highlighted the Taliban’s denials and also urged progress on reconciliation.
Afghan President Ashraf Ghani, voicing outrage over the attacks, said his internationally recognized government would resume offensive operations against the Taliban.
The government, hoping to pave the way for peace talks with the Taliban, had been observing a unilateral policy of only responding defensively when attacked.
The insurgents on February 29 signed an agreement with the United States, which has begun withdrawing troops as part of President Donald Trump’s hope to end America’s longest-ever war.
The Taliban imposed an austere brand of Islam over much of Afghanistan from 1996 to 2001 and welcomed Al-Qaeda but have increasingly jostled for influence with the Islamic State group.
In making a deal with the United States, the Taliban agreed to oppose foreign extremists and not attack Western troops, although they have kept up violence against Afghan forces.
Afghanistan’s intelligence agency has linked the Islamic State group to the Taliban-linked Haqqani network, which the United States considers a terrorist group.