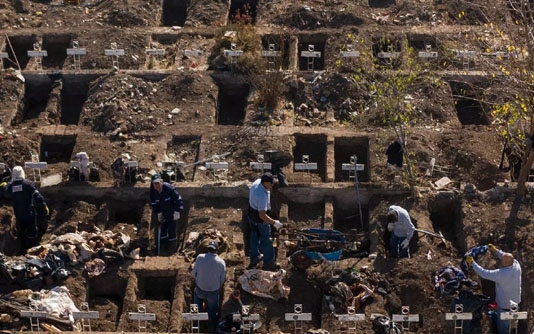 Thousands of fresh graves are being dug in the Chilean capital’s main cemetery amid a spike in the South American country’s COVID-19 cases, authorities said Thursday.
Chile’s infection rate soared this week, prompting the government to declare a mandatory lockdown of Santiago’s seven million people from Friday.
The country recorded between 350 and 500 new infections a day until a surge in cases at the weekend. By Wednesday, 2,600 infections were registered in a 24-hour period, with almost the same number on Thursday.
“We realize that this is a historical moment and that we may need more graves, because we see what’s happened in other countries,” cemetery director Rashid Saud told AFP.
Gravediggers were preparing 2,000 fresh graves to cope with the pandemic which has so far claimed 368 lives in Chile since March 3.
“We have to contrast it with other countries that have resorted to mass graves, with countries which have had dead people on the streets and rotting corpses in trucks. That is what we want to avoid and hopefully we will not have to use them,” Saud said of the new graves.
The head of the cemetery workers’ union, Luis Yevenes, said he was concerned about the situation in other Chilean cities, citing a “lack of capacity” in Valparaiso and Vina del Mar in the center, and the cities of Concepcion and Talcahuano farther south.