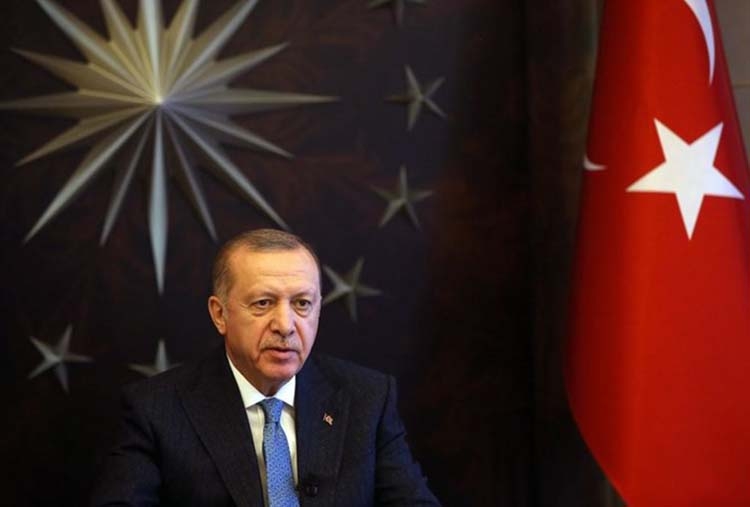 On the Turkish capital's bridges and bus stops, Ankara mayor Mansur Yavas urges wealthier residents to help poorer citizens during the coronavirus pandemic by paying off their debts to grocers.
"Kindness is more contagious than disease," the advert proclaims, showing a large black book with the word "paid" in red. Despite a government block on donation campaigns by Yavas and Istanbul mayor Ekrem Imamoglu in March, they have continued to help those in need. The mayors, representing the main opposition CHP in an alliance with a smaller nationalist party, won the two biggest cities last year.

Their success and growing popularity mean they are now seen as potential rivals to President Recep Tayyip Erdogan.
The interior ministry has launched investigations into the mayors and the government insisted donations must go through its "National Solidarity" campaign.
It has so far raised around two billion Turkish lira ($290 million) in the country which is hard hit by the outbreak with over 144,000 cases and 4,007 deaths.
The mayors' success was the first time in 25 years Erdogan's ruling AKP or its predecessors were not in charge of Ankara or Istanbul.
Erdogan refused to accept Imamoglu's initial victory in March 2019, and called for a re-run, citing corruption in the counting. Imamoglu won again with a bigger majority.
Deputy CHP chairman Seyit Torun said the government was "really disquieted" by the municipalities "fulfilling their responsibilities."
"During elections, they claimed CHP municipalities would cut people's assistance, and would do this and that," said Torun, who is in charge of CHP's local administrations.
"They slandered us," he told AFP, adding: "But now the truth is out there."
Erdogan suggested the municipalities made moves "which had been attempted by the PKK (Kurdish militants)" and the group blamed for the 2016 failed coup.
Both are outlawed as terrorist organizations in Turkey.
"There is no point in having a state within a state," Erdogan said last month, accusing the mayors of acting illegally and showing off.
But the AKP's Cevdet Yilmaz denied any political motives behind the government's actions, telling foreign media Thursday: "We want them to work in coordination, not in isolation, from other initiatives."
Kemal Cokakoglu, Ankara municipality's deputy general secretary, refused to be drawn on politics but insisted Yavas' campaign was not illegal.
"A city of around six million doesn't have even a second, a minute, or an hour to show off, or the luxury either," Cokakoglu told AFP.
While Imamoglu garnered more press attention, a Metropoll survey quoted by local media said Yavas was the most trusted politician after the health minister and the science committee leading the COVID-19 response, ahead of Erdogan in fourth place.
By managing the crisis well, the municipalities have become an "open threat" to the government's future, said Seren Selvin Korkmaz, Istanbul Political Research Institute director.
She said the government sought to "consolidate its own base" by targeting the opposition and changing the agenda, and by creating an "us" versus "them" situation.
The signs were already not good for the mayors before the crisis, with attempts by the government to limit municipalities' powers and block decision-making processes.
Erdogan is aware of the impact a successful mayor can have, after winning the seat in Istanbul in the 1990s before his party's national success in 2002.
But Imamoglu and Yavas have raised substantial funds.
Imamoglu's "pay it forward" campaign for outstanding utility bills obtained around 15 million lira ($2.1 million), a week after its launch early May.
The Ankara municipality followed suit with a website called "One Heart Ankara," where wealthier citizens can pay the water bills of struggling families, top up their travel cards or donate money to people who have lost their jobs.
As the Muslim fasting month of Ramadan began last month, Yavas sought financial donations to "give iftar" (the evening fast-breaking meal).
Despite a cyberattack when it first came online, the municipality reached its goal to provide nearly 265,000 meals after over 35,000 people donated.
On an industrial estate in Ankara, several fully protected women and men cook the meals for poor families and older citizens who are unable to leave their homes.
Korkmaz said the call to pay off debts and utility bills allowed the mayors "to respond to the daily needs of citizens."
In Ankara's Altindag district, shop owner Mudaver Uygur said a debt of around 5,500 lira ($790) was paid off by two unknown individuals in cash on Wednesday.
"We had more debts but wrote them off thinking we wouldn't get the money," he added. "May God bless (Yavas)."
---AFP, Ankara