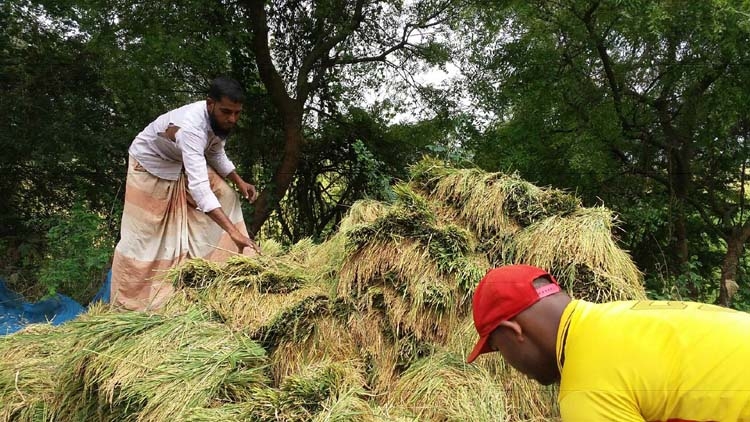 Farmers in Natore spending busy time transporting paddy to rice mills as bumper yield of paddy is showing signs of major profit in this season. The photo was taken on Thursday. -AA
Farmers were not getting normal prices of agricultural products produced during the Corona crisis. When it was almost impossible to supply the vegetables produced in the outside district, farmers could not sell their vegetables at towns and local markets due to the syndicate of existing middlemen. In view of this situation, the Natore District Administration and the Department of Agricultural Marketing have made arrangements to sell farmers' produce at a fair price two days at a week without intermediaries.
On Friday (May 15), the direct market for farmers has started in Natore. Natore-2 constituency MP Shafiqul Islam Shimul inaugurated the exceptional farmer's market at bus terminal market of the town. From today, on every Fridays and Saturdays of the week, marginal farmers have started selling their produce directly to consumers in this market.
Sources in the deputy commissioner's office said the local administration would not take any revenue for this farmer's market. Besides, for the first time, marginal farmers have expressed relief over the opportunity to sell agricultural products directly. They thanked the administration for this initiative.
Abul Kalam Azad, a marginal farmer, said, "We have had to throw away the eggplants when we have not been able to sell several times in the last two months. I could not supply it for sell to market because of the syndicate of existing traders cycle. Now I have brought eggplant to sell in the farmer's market.'
Another farmer named Zakir Hossain said, 'We have been talking about such a market again and again. We did not have an organized market for our own products. This time the market has been established. If the administration continues the market in the future, the fair price of the crop will be ensured in the coming days.'
Shariful Islam Ramzan, director of FBCCI and chairman of Natore Sadar Upazila Parishad, said, "Farmers Market' is a very timely initiative in the interest of farmers. This process will eliminate the traditional moderation of the distribution system.'
DC Natore Md. Shahriaz said, "We have taken steps to ensure fair prices for the farmers so that they do not suffer in the Covid period. We will motivate marginal farmers to sell their produce in this market. We are thinking of expanding this market in the future.'
MP Shafiqul Islam Shimul said, "The middlemen buy the product of the farmers at a lower price and sell it at a higher price. Again, the farmers themselves are suffering in various ways to sell in the market. That is why this farmer's market was inaugurated under the direction of the government. The Awami League government is working for the welfare of the farmers which will continue in the future as well.'