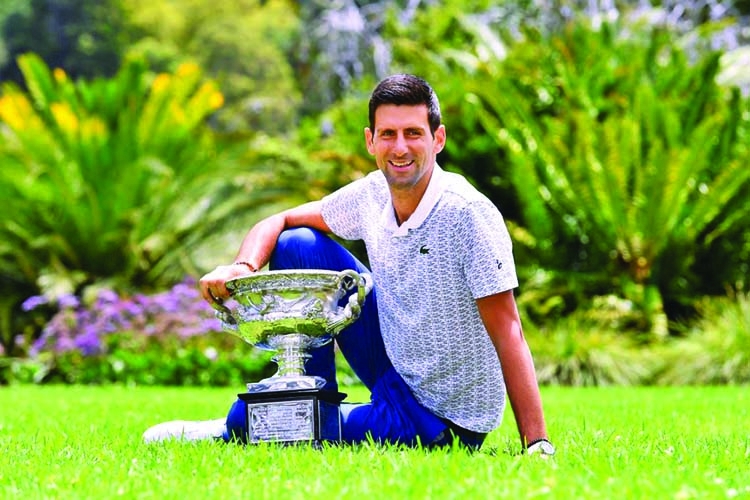 Novak Djokovic poses with the Australian Open trophy. -AP
Novak Djokovic believes he will win the most Grand Slam titles and become the longest-reigning world number one by the time he retires, the 32-year-old Serb said in an interview.
The current world number one has 17 Grand Slam titles to his name - two behind Rafa Nadal and three fewer than Roger Federer - and said he has no doubt in his ability to overtake the other members of the so-called 'Big Three.' "I'm always very confident in myself," he said in an interview on In Depth with Graham Bensinger. "I believe I can win the most slams and break the record for longest number one. Those are definitely my clear goals."
Djokovic was in imperious form before the novel coronavirus pandemic brought the circuit to a halt in early March. He lifted the ATP Cup with Serbia, won an eighth Australian Open title and then completed a fifth triumph at the Dubai Tennis Championships, extending his unbeaten run to 21.
Swiss great Federer also owns the record for total number of weeks at number one, with 310, and consecutive weeks at the top position, with 237, compared with Djokovic's 282 and 122. Federer turns 39 in August and Djokovic said he could envision himself still playing at 40. "I don't believe in limits. I think limits are only illusions of your ego or your mind," he said.
It wasn't too long ago that Djokovic had an entirely different outlook on the game. After falling in straight sets to unseeded Benoit Paire at the Miami Open in 2018, his wife, Jelena, said he was ready to hang up the racquet. "He said to me that he's quitting and that's the truth," she said in the interview. "He lost in Miami. It was a terrible loss. And then he just, you know, gathered all of us and said, 'You know guys, I'm done.'" "And I was like, 'What?' And he goes like, 'Yeah.' He said, 'Edoardo [Artaldi], you can speak with my sponsors. I want to be clear with them. I don't know if I'm stopping for six months, a year or forever.'"
Djokovic did not go through with his retirement plans and bounced back to triumph at Wimbledon that July. In the wide-ranging interview, Djokovic also discussed past struggles with his health, his marriage and surviving the bombings in his native Serbia in 1999. The full interview will air in the U.S. this weekend on local affiliates, and on international and regional sports networks next week.