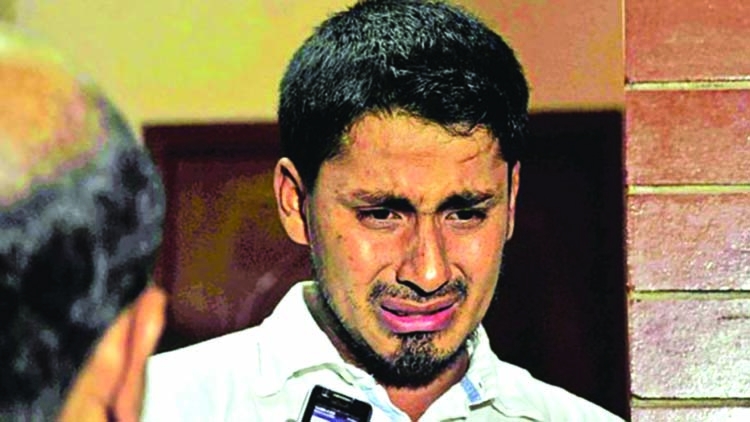 2013: Mohammad Ashraful cries after pleading guilty to illegal fixing during the Bangladesh Premier League. -Collected
Speaking on sports journalist Mohammad Noman's YouTube live 'Not Out Noman' on Thursday night, former Bangladesh skipper and Youngest Test centurion Mohammad Ashraful revealed how he once wanted to kill himself due to immense mental pressure.
In the live show, Ashraful unfolded this unknown story of his life. He stressed that it had been at a time tougher even than the current pandemic for him.
Ashraful, who fascinated the cricket world smashing a hundred on his Test debut back in 2001 against Sri Lanka at the age of 16, is currently passing time at  home as there is no cricketing activity in the country. "That was the worst time of my life when I accepted my fault of being involved in the match-fixing scandal. I was banned for years, which later reduced to three. That was a tougher time for me than this pandemic," Ashraful said in the show on Thursday night.
"I can still remember how devastated and upset I was. By then everyone came to know that I am an offender, everyone came to know that I have done something that was not expected from me. After this incident, everyone, who was close to me, started to go away. I was left alone and stranded. I was clueless about how to live the next part of life, I was clueless about how I go public again. I was very much anxious about how I repair this damage," Ashraful added.
Ashraful could not bear all the pressure. "At one time I thought I would commit suicide rather than living this life. Then I go for Hajj. Going to Hajj changed my mindset," he further added.
He played for the national team for the last time back in 2013. He represented Bangladesh in 61 Tests, 177 ODIs and 23 T20 International. After serving a ban of three years, Ashraful also returned to play domestic cricket, but never returned to his previous form.
The right-handed batsman had told the media several times that he wants to make a comeback to the national side again, but it seems to be an elusive dream for him.