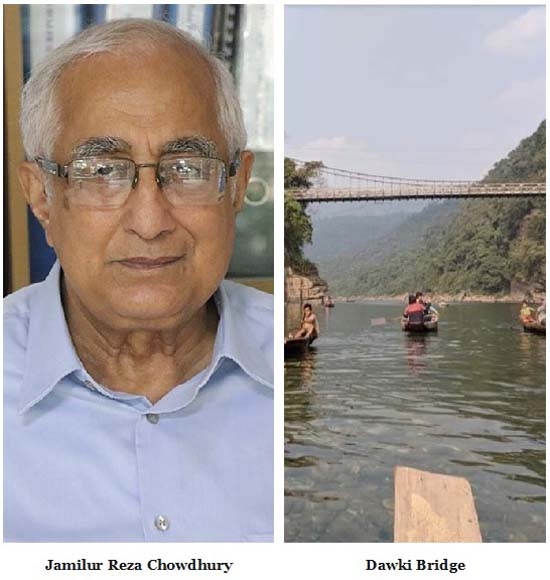 Bangladesh has lost one of the land's most illustrious sons a few days ago. He was in fact the Jewel in the crown of the country's Engineering and Technology. His hands charisma was required in every conceivable Engineering feat of the country: be it the establishment of the first computer center, or the Jamuna/Padma bridges or the Karnafully tunnel. For every Engineering problem he had a solution suitable for his country. He had been revered by all Engineers of the country from recent foreseeable past. Of course most of them had been his direct students.
From the moment of his passing by to the lap of Almighty for greater services obituaries have been incessantly pouring in through all conceivable media. I am not a writer and do not consider myself qualified to pen down one in a befitting manner. But my childhood friend and a veteran journalist/sports commentator of London and Bangladeshi at heart Uday is insisting upon my writing a short memo on my personal experience with JRC Sir and Jamil Bhai to us as well. So here it goes good or bad.
Readers will find it out of place to find a picture of the Dawki Bridge here in this write up. But it certainly has a connection. Kobiguru Rabindranath came to Shillong for a couple of weeks in 1919. Sylhet enthusiasts in art and culture came to know about it instantaneously and left no stone unturned to bring the poet to Sylhet for a few days. Kobiguru was not interested much. He had ailing family members who came to Shillong for a change. He himself was not that fit
Last but not the least, there was no direct motorable road from Shillong to Sylhet those days. People had to cross a part of the road on chairs carried by Khashi men. And then there was the Umngot River which had to be crossed by boat. Rest of the path was motorable alright.Kobiguru was dead against crossing any part of the journey on shoulders of fellow human beings which he treated as inhuman.
So,the journey was planned by train following Shillong-Guwahati(by car) and Guwahati-Badarpur-Karimgonj-Kulaura(by train). Let's come out of that episode. It was felt by the authorities that a Shillong-Sylhet road connection has to be established.Work started and progressed but the stumbling block was the rapidly flowing Umngot River near Dawki/Tamabil. The name of the river has changed to Piyaain when it entered Bengal plains.
The river is actually between Khashi and Jaintia hills. A proper bridge had to be built over Umngot to complete the road. The Engineer who came up with a feasible design of an iron suspension bridge was the first Bengali Muslim Engineer from greater Sylhet. He was Abid Reja Chowdhury who successfully designed this bridge in 1930 and it was commissioned by 1934. It has been successfully functioning since then and stood the test of time. Moreover it has become a tourist object as well. Tourists from both countries enjoy its beauty by going as close as it that BSF personnel allow.
So our JRC comes of such an illustrious family of Hailakandi once a part of our Sylhet district that we lost in the plebiscite in 1947.All three of Eng. Abid Reja's sons followed footprints of their father to become worthwhile Engineers JRC Sir's elder brother shifted to England to practice his profession.
About Sir's checkeredEngineering career and success,I am not a man to evaluate. That can easily be guessed by the respect and honour he masters from all and sundry in Bangladesh and abroad. He was our National Professor and we looked for all our national Engineering solutions to him. The void created by his departure will not be easy to fulfill,if at all. His youngest brother MRC (Badal) was my classmate in BUET.We played Table Tennis together. During that period our BUET Team was very strong and was inter university champion.
Besides in Bangladesh open most of the top positions were won by our team members Alim, Mahboob, Badal. Jamil Bhai was a sports enthusiast and was the Vice President of Bangladesh TT Federation. He came everyday to the venue to organize and enjoy the games. Though he was our professor, he was always very friendly with us.
On another account he became my Jamilbhai. My classmate in USSR(while pursuing higher studies) Kazi Mohiuddin Ahmed got married to Bhabi(Mrs. JRC)'s younger sister Rana. Whenever we met,there always had been a little discussion about this couple.
He knew me on another account. I have joined the first export oriented garments industry in Bangladesh as a Manager.
The company belonged to one of his close relatives. So we talked about that too when we met.
Most striking thing to me was when I was touring Chon Beel(a haor encompassing Hailakandi, Karimgonj and a part of may be Shilchar, the biggest water body in Assam)I put some pictures on my FB. Immediately he queried what I was doing there and was pleased that I went there for sightseeing. He informed about his childhood memories there.
The last I talked to him was last winter. There was a Rotary event in Sylhet where Taimoor Raja Choudhury came as a delegate and speaker. He is a journalist of repute in Shilchar and is an Editor of the most famous Daily there. TRC andJRC knew each other. I was entrusted with looking after Taimoor Bhai.
When he desired to talk to JRC,I could arrange it without much difficulty and both of them were happy. In the process I also could exchange pleasantries with Jamilbhai. But God Almighty only knew that it was for the last time in our life.May Almighty grant him the most coveted place in his eternal abode.


The writer is a researcher and travel writer.